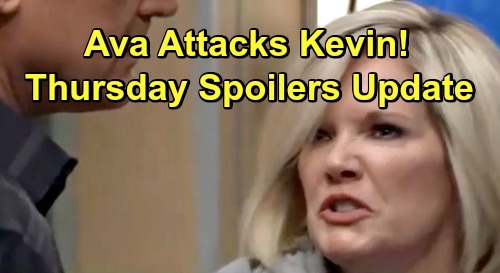 General Hospital (GH) spoilers for Thursday, March 14, tease that Lulu Falconeri (Emme Rylan) will battle confusion. She won’t understand why Laura Webber (Genie Francis) isn’t in a hurry to invalidate the divorce. Lulu may suggest she thought Laura would be thrilled over her reunion with Dr. Kevin Collins (Jon Lindstrom). She’ll definitely be suspicious when that doesn’t seem to be the case.

Of course, Laura just found out Kevin had been keeping Ryan Chamberlain’s (Jon Lindstrom) survival a secret. His deception led to so much pain and so many losses. That’s something Laura won’t be able to get over right away. Over with drunk Ava Jerome (Maura West), she’ll whack Kevin across the face and call him an SOB for everything he did to her. However, she’ll have the wrong twin once again.

Ava will believe she’s blasting Ryan, the man who violated her repeatedly and murdered Kiki Jerome (Hayley Erin). She’ll actually be lashing out at the real Kevin, who set all this in motion. Kevin needs a harsh lecture, so this instance of mistaken identity isn’t so bad.

Other General Hospital spoilers say Harrison Chase (Josh Swickard) will deepen his relationship with Willow Tait (Katelyn MacMullen). They’ll move things along – perhaps with a hot hookup and some plans for the future. It appears Shiloh Archer (Coby Ryan McLaughlin) is Willow’s “baby daddy,” so he’ll inevitably cause problems down the road.

In the meantime, Shiloh will once again put on his nice guy act. When he drops by GH, he’ll insist he wants to help Oscar Nero (Garren Stitt). Drew Cain (Billy Miller) and Dr. Kim Nero (Tamara Braun) will naturally be wary. Despite his smile and cheerful demeanor, there’s something incredibly creepy about Shiloh. He’s obviously quite a villain under the surface, so Kim and Drew will reject his offer.

Shiloh will maintain that miracles are pretty common. He’ll hint that Oscar could get one, but Kim won’t want any false hope. Across town, Sam McCall (Kelly Monaco) and Molly Lansing-Davis (Haley Pullos) will deal with some sister drama. Kristina Corinthos-Davis (Lexi Ainsworth) will be offended by their opinions regarding her choices.

Molly and Sam will just be watching out for Kristina, but she won’t see it that way. If they can’t respect who she is and what she wants, Kristina won’t want them in her life. Elsewhere, Dr. Hamilton Finn (Michael Easton) will support Anna Devane (Finola Hughes). She’ll be upset over her jumbled memories and which ones are really hers.

Some of Anna’s memories are actually Alex Devane Marick’s (Finola Hughes), but she won’t be any closer to nailing those down yet. Thankfully, a visit with Andre Maddox (Anthony Montgomery) is coming up soon. He should be able to at least put Anna on the right track.

General Hospital spoilers say Sonny Corinthos’ (Maurice Benard) hunt for Dante Falconeri (Dominic Zamprogna) will press on. Unfortunately, it seems that search will happen offscreen for the next episode or two. On the bright side, Dante’s official return is rapidly approaching. That’s something for GH viewers to get excited about!

Are you looking forward to all the Dante mayhem ahead? We’ll give you updates as other GH news comes in. Stay tuned to the ABC soap and don’t forget to check CDL often for the latest General Hospital spoilers, updates and news.