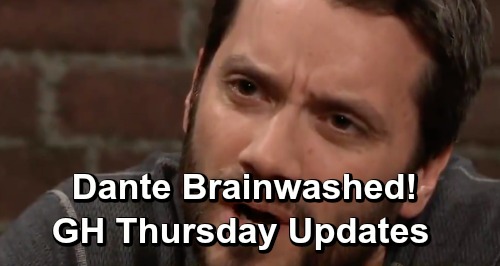 General Hospital (GH) spoilers for Thursday, March 28, tease that Valentin Cassadine (James Patrick Stuart) will stop by Lulu Falconeri’s (Emme Rylan) place. They may have some Charlotte Cassadine (Scarlett Fernandez) issues to discuss, but Lulu won’t want to talk about anything else. She’ll indicate that there’s absolutely no trust here, so Valentin might as well take a hike.

Across town, Nina Reeves (Michelle Stafford) will put on a smile and make nice with Elizabeth Baldwin (Rebecca Herbst). She may mention how Charlotte is no longer a problem for Aiden Webber (Jason David) and express relief over resolving the matter. Nina will be eager to put any drama behind them, especially since she feels like the rest of her life is looking up.

Other General Hospital spoilers say Harrison Chase (Josh Swickard) will wonder what caused Willow Tait’s (Katelyn MacMullen) change of heart. GH fans know it was Brad Cooper’s (Parry Shen) interest in Dawn of Day, but Willow may or may not feel comfortable revealing that. She’s starting to trust Chase, but she’s also used to having her guard up. Willow’s got a lot at stake, so she can’t be too careful.

Later, Willow will have a reassuring conversation with Liz. She may hear about how Aiden was excluded from Bianca’s birthday party, but that was the fault of the girl’s mother. Willow can’t make her students’ parents be open-minded and accepting, but she can promote that kind of atmosphere in her classroom. She’ll let Liz know that everything’s going to be OK, so Liz will do her best to trust that.

Jason recently assaulted this cult leader, but he could’ve done far worse damage and Shiloh must know that. General Hospital spoilers say Jason will believe Shiloh’s afraid deep down. He’ll think that’ll work to their advantage as they try to get him away from Kristina Corinthos-Davis (Lexi Ainsworth).

Meanwhile, Dante Falconeri (Dominic Zamprogna) will struggle with the effects of brainwashing. He talked to Mike Corbin (Max Gail) about some of his difficulties, but it looks like he’ll go deeper with someone else on Thursday. Dante is already having a hard time, but things are only going to get worse. Jason will pry a knife out of Dante’s hands by the end of the week, so stay tuned.

At GH, Dr. Monica Quartermaine (Leslie Charleson) will help Dr. Kim Nero (Tamara Braun) and Drew Cain (Billy Miller) understand how to proceed. She’ll believe they need to talk about the end of the road. Oscar Nero’s (Garren Stitt) days are dwindling rapidly, so Monica will want to make Oscar’s final preparations and bring him in the loop.

Finally, Oscar will have a heart-to-heart with Cameron Webber (William Lipton). Will he give Cam his blessing to move on with Josslyn Jacks (Eden McCoy)? Oscar would hate it if Joss mourned him for too long, so he may count on Cam to lift Joss out her inevitable funk. He may suggest they’ll be a good match once he’s gone and Josslyn’s worked through her grief.

Join us on Tuesday (April 2nd) for a very special episode that celebrates the history and legacies of #GH. Don't miss out! #GH56 pic.twitter.com/0UAHUCvIg7