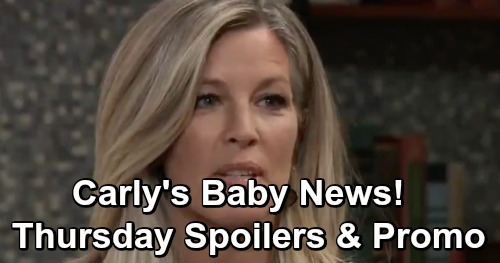 General Hospital (GH) spoilers for Thursday, May 16, tease that Drew Cain (Billy Miller) will check on Dr. Kim Nero (Tamara Braun). Dealing with Oscar Nero Quartermaine’s (Garren Stitt) death has been difficult for both of them, but it’s naturally harder on Kim. She built her world around Oscar, so now that world has crumbled.

Drew will offer support on Thursday, but he’ll worry that Kim might be leaving town. He won’t think it’s a good idea for Kim to cut herself off from the people who care about her. Kim has connections in Port Charles, so Drew will encourage to stick around and lean on her loved ones. It looks like Kim will agree to stay in PC for now.

Molly will have an idea that could help, but she’ll need assistance from a surprising source. GH fans can expect Peter August (Wes Ramsey) to step up for Molly in some way. He probably won’t know her true motives, but he’ll like what Molly suggests and go to bat for her.

Meanwhile, Sam will deliver orders to Damian Spinelli (Bradford Anderson). She’ll insist he’s going to record her initiation, but the equipment has to be set up first. Sam will point out that Shiloh will be attending the Nurses Ball with her, so Spinelli and Jason Morgan (Steve Burton) will have a chance to plant all the devices.

Over with Anna Devane (Finola Hughes), she’ll share her suspicions. Anna will believe she’s going to receive a marriage proposal, so she’ll open up and get some advice from Peter. She’ll probably get updates on his budding relationship with Maxie Jones (Kristen Storms) as well, so she’ll definitely be thrilled for him.

Next, Sonny Corinthos (Maurice Benard) will ponder a mystery. He’ll have no idea how Mike Corbin (Max Gail) ended up with an expensive, ornate engagement ring. Michael Corinthos (Chad Duell) will join Sonny as they debate how it ended up in Mike’s hands. They’ll try to figure out who this ring belongs to so they can return it to its rightful owner.

At GH, Dr. Hamilton Finn (Michael Easton) will be fed up. He wasn’t happy when Robert Scorpio (Tristan Rogers) handed over the replacement ring, so he quickly called him out on the phony. Finn will demand the real ring immediately, but Robert can’t give it. As a result, Finn will bring Harrison Chase (Josh Swickard) in on this. He’ll want to take his brother up on his offer of going after Robert.

Fortunately, there should be an easy solution when this mess gets sorted out. They can just give the fake ring to Yvonne Godfrey (Janet Hubert) and give the real one back to Finn. It’s safe to say Yvonne and Mike won’t know the difference.

Laura Webber (Genie Francis) was seemingly being attacked by Ryan when we last saw her. She’s obviously going to survive, but she’s in major danger right now. Finally, Carly Corinthos (Laura Wright) will get her latest test results. She’ll beg the doctor to tell her the baby’s healthy and hope for good news.

It sounds like another exciting episode’s on the way. We’ll keep you posted as other GH details emerge. Stay tuned to the ABC soap and don’t forget to check CDL often for the latest General Hospital spoilers, updates and news.