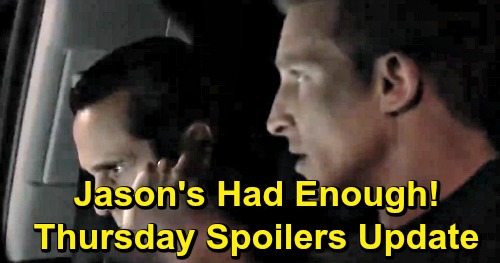 General Hospital (GH) spoilers update for Thursday, May 23, tease that Shiloh Archer (Coby Ryan McLaughlin) will move forward with Sam McCall’s (Kelly Monaco) initiation. He’ll suggest he’s going to show a seemingly out-of-it Sam a new dawn, which will be the last straw for Jason Morgan (Steve Burton). Jason will be privy to what’s happening thanks to the planted equipment, so he won’t stand for this.

As Sonny Corinthos (Maurice Benard) sits next to him, Jason will declare it’s time to move. He’ll hit the gas on the vehicle they’re in and race to stop Shiloh. General Hospital spoilers state that Jason will be armed and dangerous, so Shiloh may be in deep trouble. He’ll be hospitalized pretty soon, so Jason could be responsible for that.

For now, Jordan Ashford (Briana Nicole Henry) will be the one suffering at GH. She’ll be in V-tach, so that should leave Curtis Ashford (Donnell Turner) terrified for his wife. General Hospital spoilers say Jordan will ultimately be stabilized, but she’ll still need a new kidney. The police commissioner will face certain death without one, so Curtis and T.J. Ashford (Tajh Bellow) will have to keep hope alive.

In the ballroom, Dr. Kevin Collins’ (Jon Lindstrom) predicament will leave the lingering guests in shock. Lucy Coe (Lynn Herring) was horrified to see Kevin dangling above her in a straitjacket. It won’t take her long to figure out this is Ryan Chamberlain’s (Jon Lindstrom) handiwork.

General Hospital spoilers say Mac Scorpio (John J. York) will be nearby, so he’ll likely bring unconscious, hanging Kevin down. Felicia Scorpio (Kristina Wagner) will also help Lucy and Kevin deal with the drama. They’ll gather around Kevin to make sure he’s breathing and urge him to hang on.

Of course, we know Kevin will survive and make a full recovery. Ryan’s accomplice in Canada, however, is as dead as doornail. Laura Webber (Genie Francis) will blame Margaux Dawson (Elizabeth Hendrickson) in Thursday’s episode. She’ll rant about that woman’s death, but Margaux won’t exactly look broken up about it.

Nevertheless, Laura will offer Margaux a chance to redeem herself with a new plan. Margaux shut down the Ryan investigation, which was obviously a mistake. Now the DA has a shot at apprehending this serial killer, but she won’t agree with how Laura intends to do it.

Meanwhile, Ava Jerome (Maura West) will get what she wanted – one last encounter with the man who murdered her daughter, Kiki Jerome (Haley Erin). Nevertheless, you should be careful what you wish for. Ava will look petrified as Ryan stands nearby with a knife and gushes about how much he’s missed her.

Will Ava use that same knife against Ryan? She might as well! Unless help arrives, Ava will have to find some way to take Ryan down and save herself. Elsewhere, Harrison Chase (Josh Swickard) will meet up with a nervous Willow Tait (Katelyn MacMullen). Michael Corinthos (Chad Duell) will be on hand as Willow describes her confrontation with Shiloh. She’ll confess that Shiloh now knows about the baby.

The only upside is Shiloh doesn’t know the identity of that baby – but that could change if Brad Cooper (Parry Shen) screws up. He’s already made a huge mistake by getting caught up in Dawn of Day. Sticking with DoD is dangerous, but so is pulling away. Anything that raises red flags could cause issues for Brad’s family.

On Thursday, conflict will erupt between Brad and Lucas Jones (Ryan Carnes). Lucas will insist Wiley Cooper-Jones is the child Willow hid from Shiloh. Brad’s reaction will probably make something else click for Lucas. He should determine that Brad’s been holding out on him!

Lucas won’t understand why Brad would keep the birth mom news a secret. He’ll flip out over the possibility of Shiloh taking their son, but he doesn’t have the whole story. “Wiley” is really Jonah Corinthos, so Brad’s deception is worse that Lucas could ever imagine.