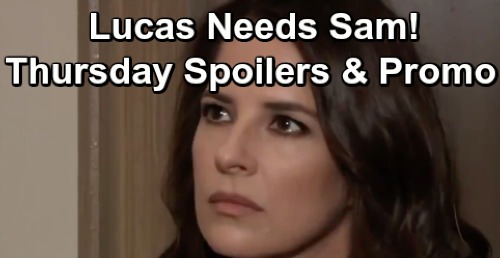 General Hospital (GH) spoilers for Thursday, May 30, tease that Jasper “Jax” Jacks (Ingo Rademacher) will surprise Nina Reeves (Michelle Stafford) with some huge news. He’ll suggest that Nina should say hello to the new owner of Crimson. Nina will look awfully flustered, which is to be expected after the way she acted at the Nurses Ball. It’s clear that Nina’s charmed by Jax and his smooth moves.

However, Nina’s bubble could burst once she learns more. Maxie Jones (Kirsten Storms) flipped out over some budget drama on Wednesday, so Jax may be tightening the purse strings. He might have other changes in mind as well. Jax seems interested in Nina, but business comes first – at least for now. GH fans can expect some big problems to arise for Nina soon enough.

Other General Hospital spoilers say Lucas Jones (Ryan Carnes) will share his concerns. During their next conversation, Alexis Davis (Nancy Lee Grahn) will get updates on the latest Wiley Cooper-Jones drama. Lucas will point out that the birth father never knew about the child, so Alexis will ask if he knows now.

There’s no reason for Lucas to lie to Alexis, so he should admit that the birth father indeed knows. Whenever Shiloh Archer’s (Coby Ryan McLaughlin) name is ultimately brought into this, that should leave Alexis worried. She knows what Shiloh is capable of, so this is definitely a horrible situation.

Over with Julian Jerome (William deVry), he’ll tell Sam McCall (Kelly Monaco) that Lucas needs her help. Julian will have some strategy for dealing with Shiloh, so he’ll think Sam can pitch in. She understands what makes Shiloh tick, but she may be hesitant to start another round of chaos. Even so, Lucas is family and that means Sam will likely step up.

Next, Harrison Chase (Josh Swickard) will check in with Willow Tait (Katelyn MacMullen). He’ll wonder what happened after he left the Nurses Ball, so Willow may talk about her confrontation with Lucas and Brad Cooper (Parry Shen) as well as Michael Corinthos’ (Chad Duell) support. Willow is definitely glad to have Michael on her side.

At GH, Ryan Chamberlain (Jon Lindstrom) will be doing much better after his surgery. That’s half the battle since Jordan Ashford (Briana Nicole Henry) needs Ryan alive to score her kidney. However, there’s another crucial issue here, which Dr. Hamilton Finn (Michael Easton) will bring up. He’ll tell Jordan and Curtis Ashford (Donnell Turner) that they can’t do anything without Ryan’s consent.

Lulu Falconeri (Emme Rylan) suggested Ryan might give up a kidney if he got something in return. Of course, Ryan may drive a hard bargain. If he makes ridiculous demands – like being cleared of all charges and walking free – there’s no way they can be granted. Saving Jordan’s life won’t matter if Ryan ends up murdering others.

Over in Ryan’s room, he’ll get a visit from one of his victims. Franco Baldwin (Roger Howarth) survived Ryan’s brutal stabbing, but Kiki Jerome (Hayley Erin) wasn’t as lucky. General Hospital spoilers say Franco will confront Ryan in Thursday’s episode. He’ll note that today would’ve been Kiki’s birthday, so he’ll be furious that Ryan robbed her of this milestone and so many more.

Back with Willow, she’ll get some kind words of support from Lulu. Anna Devane (Finola Hughes) will also face some creepy moments, which could involve a message from her sneaky sister. She’ll be determined to have a showdown with Alex Devane Marick (Finola Hughes) before long!

It sounds like some exciting scenes are coming up. We’ll keep you posted as other GH details emerge. Stay tuned to the ABC soap and don’t forget to check CDL often for the latest General Hospital spoilers, updates and news.