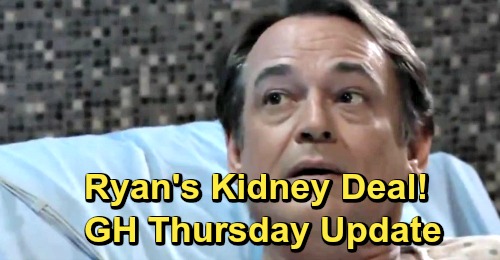 General Hospital (GH) spoilers update for Thursday, May 30, tease that Franco Baldwin (Roger Howarth) will unleash his wrath. In Ryan Chamberlain’s (Jon Lindstrom) room at GH, he’ll be looking remarkably healthy for someone who suffered a stab wound and underwent emergency surgery. Since Ryan survived, Franco will use this opportunity to confront him about all the pain he’s caused.

Since this would’ve been Kiki Jerome’s (Hayley Erin) birthday, Franco will be especially riled over the loss. He’ll fume over Ryan killing a young, vibrant girl and hope he gets what’s coming to him soon. Meanwhile, Jordan Ashford (Briana Nicole Henry) will get good news and bad news.

The good news is Ryan survived, so there’s a kidney match that could save her life. The bad news is they can’t do the transplant without Ryan’s consent.

Dr. Hamilton Finn (Michael Easton) will provide updates to Jordan and Curtis Ashford (Donnell Turner). Ryan might give up his kidney in exchange for something, but what happens if his demands are excessive?

This is a psychotic serial killer who needs to be locked up somewhere with the strictest security measures possible. Something tells us Ryan will want a more pleasant existence, so he may play hardball.

Over with Willow Tait (Katelyn MacMullen), she’ll be questioned by Harrison Chase (Josh Swickard). Chase will ask what happened after he left the Nurses Ball, so he’ll probably hear about the drama with Lucas Jones (Ryan Carnes) and Brad Cooper (Parry Shen). Willow may also express gratitude for Michael Corinthos’ (Chad Duell) friendship. He’s become a strong ally that she can rely on.

Lulu Falconeri (Emme Rylan) will interact with Willow on Thursday as well. Will this involve the Dawn of Day story at The Invader? Regardless, Lulu will let Willow know she supports her. Across town, Sam McCall (Kelly Monaco) will be asked for a favor. General Hospital spoilers say Julian Jerome (William deVry) will need one – not for himself, but for Lucas.

Sam thought she could put Shiloh Archer (Coby Ryan McLaughlin) in the rearview mirror, but she’s about to find out that’s not the case. After Julian brings Sam up to speed on the latest Wiley Cooper-Jones details, he’ll offer a way she can pitch in. Julian will count on Sam to come through for Lucas when he needs her most.

Lucas will meet with Alexis Davis (Nancy Lee Grahn) to discuss the birth father drama, so she’ll have some concerns, too. Alexis will learn the birth father didn’t know about the baby before the adoption. She’ll ask Lucas if the birth father knows now, so he may admit it’s complicated. Shiloh knows he has a child, but he doesn’t know it’s Wiley.

Of course, Lucas doesn’t know the real Wiley’s dead, but that’s another layer that’ll be peeled back down the line. For now, we’ll see more Shiloh shockers. Alexis is sure to be horrified when she finds out Shiloh is connected to Brad and Lucas’ kid.

Other General Hospital spoilers say Anna Devane (Finola Hughes) will get a bit spooked. The creepy factor will be dialed up a notch and that’s probably because of her twisted sister. GH fans can expect more issues between Anna and Alex Devane Marick (Finola Hughes) soon. Anna will find herself on a fierce mission to confront Alex, so maybe a message on Thursday will bring that about.
Finally, Jasper “Jax” Jacks (Ingo Rademacher) will have an announcement to make. He’ll tell Nina Reeves (Michelle Stafford) that he’s the new owner of Crimson, so she’ll be stunned. Nina is obviously attracted to Jax, but she’ll have to put that aside to discuss work. It seems Jax intends to make changes and those changes could leave Nina uneasy.

Maxie Jones (Kirsten Storms) will join forces with Nina on a plan next week, June 3-7, so stay tuned to see what they come up with. We’ll keep you posted as other GH details emerge. Stick with the ABC soap and don’t forget to check CDL often for the latest General Hospital spoilers, updates and news.