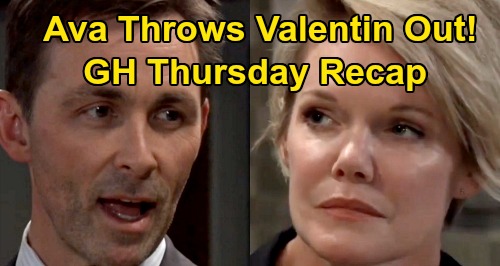 General Hospital (GH) spoilers recap for Thursday, November 21, tease that some surprises are coming up in Port Charles. Before we dive in, we should note that the show was preempted on Wednesday, November 20. The episode meant for Wednesday will now be pushed to Thursday, but we’ve got the scoop on what to expect.

For starters, Harrison Chase (Josh Swickard) will confront Hamilton Finn (Michael Easton) about his new daughter. He’ll be upset that he had to hear it from Robert Scorpio (Tristan Rogers) instead of his big brother. Finn will let Chase know he’s sorry and suggest he’s still trying to wrap his head around it. He’ll show off some cute pics of Violet Barnes (Jophielle Love) and their recent tea party, so Chase will think fatherhood looks good on Finn.

Meanwhile, Anna Devane (Finola Hughes) and Hayden Barnes (Rebecca Budig) will have a tense exchange. At the Metro Court, Hayden will wonder if that wedding’s still on for Anna and Finn. She’ll push Anna’s buttons, but Anna will push right back. General Hospital spoilers say Anna will point out that Hayden robbed Finn of years with his child. She’ll think Hayden robbed Violet, too.

Hayden will contend that she’s not too worried about it since Robin Scorpio (Kimberly McCullough) turned out OK. Anna will counter that she was protecting her daughter, but Hayden will insist they both had their reasons. Naturally, Anna will want to hear more about Hayden’s. She’ll also want to know why Hayden chose now to reveal the truth.

Hayden will note that the timing felt right, so Anna will snap that she bet it did. She’ll mention that she was out of the picture and assume that was why Hayden finally came clean. Before they part ways, Anna will want to get something straight with Hayden. She’ll welcome the addition of Violet to their life, but she’ll insist that it’s their life – meaning Anna and Finn’s shared one. Anna will contend that she doesn’t want Hayden to get it twisted!

At Wyndemere, Charlotte Cassadine (Scarlett Fernandez) will find Nikolas Cassadine (Marcus Coloma) in her living room. She’ll recognize him as the man from the pier, but he’ll spin an interesting story to keep her quiet. Nikolas will lie that Valentin Cassadine (James Patrick Stuart) hired him to protect Charlotte and he was down on the pier that night to save her. He’ll tell Charlotte he’ll be fired if she talks to her father about this, so he’ll hope she’s willing to keep his secret.

Charlotte will think she could use a secret bodyguard in light of all the drama that’s been going on. She’ll point out that there are lot of bad people out there, so Nikolas will promise to get rid of every last one. Next, Brook Lynn Ashton (Amanda Setton) will face questions at the Quartermaine mansion. Ned Quartermaine (Wally Kurth) will still be trying to process Brook Lynn’s sudden arrival. He’ll wonder what Brook Lynn didn’t call first, but she’ll imply that she wanted it to be a surprise.

After Brook Lynn greets Sonny Corinthos (Maurice Benard), it won’t be long until she clashes with Olivia Quartermaine (Lisa LoCiero). She’ll upset Olivia by asking about Dante Falconeri (Dominic Zamprogna), so it’ll be a big mess for Ned to deal with.

However, Carly will point out that Sam made her own choices. Sam handled Shiloh the way she wanted and must face the consequences. Carly will admit she’s furious with Sam for not letting Jason do his thing and get rid of the problem.

Jason will wish they’d thought about their kids and what might happen before they dove in headfirst with Shiloh. He’ll battle plenty of regrets, but Carly will think Jason just has to be a secret superhero for a while and lay low. Over with Nina Reeves (Cynthia Watros), she’ll learn Jasper “Jax” Jacks (Ingo Rademacher) won’t be attending her wedding. In fact, he’ll have some advice about her current fiancé.

Jax will argue that Nina should save her energy for someone who deserves it. He’ll suggest that being with a criminal like Valentin could ruin her life. General Hospital spoilers say Nina will eventually confess that she’s not planning to marry Valentin. She’s planning to destroy him!

At Shadybrook, Valentin will fish for portrait info and remind Ava Jerome (Maura West) that she owes him for fixing her face. Ava will shut down his any attempts to negotiate and urge Valentin to leave. Back at Wyndemere, Nikolas will eavesdrop as Valentin calls Hayden. GH spoilers say Valentin will think they can be useful to each other, so he’ll summon Hayden to hear his proposal.

Finally, Stella Henry (Vernee Watson) will make her way back to Port Charles. She’ll catch up with Curtis Ashford (Donnell Turner) and Jordan Ashford (Briana Nicole Henry) before they discuss holiday plans. Jordan and Curtis will add that T.J. Ashford (Tajh Bellow) has some big news, but they’ll think he should be the one to tell Stella.

It sounds like an action-packed episode’s coming up. We’ll give you updates as other GH details emerge. Stay tuned to the ABC soap and don’t forget to check CDL often for the latest General Hospital spoilers, updates and news.