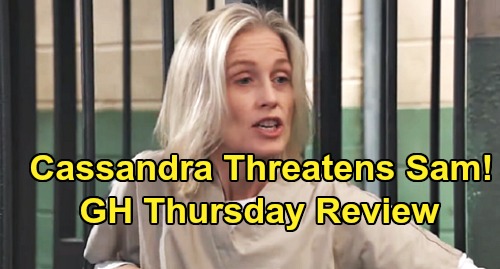 General Hospital (GH) spoilers review for Thursday, October 31, reveal that Ava Jerome got a big surprise. She attended the Halloween party at The Metro Court, where she learned that the portrait of Helena Cassadine (Constance Towers) was worth something big to Valentin Cassadine (James Patrick Stuart). Without telling Valentin that she was in possession of the portrait, she headed to her gallery, with a certain masked someone following her.

This masked man had loitered around the Halloween party a bit, where he at one point came face-to-face with Laura Collins (Genie Francis). When Ava seemed to have left her gallery, the masked man entered the dark room. But Ava then caught him, turned on the lights, and held him at gunpoint. She called him out for being the person who’s been stalking her and told him to take off his mask. He did, revealing himself to be Nikolas Cassadine (Marcus Coloma), which absolutely stunned Ava.

Meanwhile, Sam McCall (Kelly Monaco) met her cellmate, who turned out to be Cassandra Pierce (Jessica Tuck). The two women at first didn’t know each other, and Cassandra immediately asserted her authority as the “boss” in their cell. She bragged about her high crimes, and Sam asked who she was. Sam then realized that Cassandra was the person who messed with Michael Corinthos’ (Chad Duell) girlfriend. Ultimately, Cassandra ended up approaching Sam with a knife as Sam realized just what life with her new roomie was going to entail.

Next, aboard The Haunted Star, Dustin Phillips (Mark Lawson) and Lulu Spencer (Emme Rylan) watched over the teens at the high school dance, where Cameron Webber (William Lipton) was busy showing Josslyn Jacks (Eden McCoy) his stash of booze in the soda bottle. He explained that he thought it might make the evening less hard for them both, which Joss was into. The two decided to keep the alcohol between themselves and go out on the deck to drink.

While Joss and Cam were out on deck sipping whiskey, Trina Robinson (Sydney Mikayla) and Dev Cerci (Ashton Arbab) were inside dancing. It all looked pretty awkward, with Dev trying not to step on Trina’s feet and Trina getting irritated that Dev wasn’t paying more attention to her. Finally, Trina made a move and kissed Dev, who finally had to tell Trina that he liked her but not “in that way” and that he was too busy for romance. Trina was peeved.

Cam and Joss were then visibly drunk out on deck. They talked about Oscar Nero Quartermaine (Garren Stitt), and about Cam missing Franco Baldwin (Roger Howarth), and Joss told Cam that she never would have made it this far without him. They finally went back inside to the dance, and Trina pulled Joss aside and immediately noticed that she had been drinking.

Dev then noticed that Cam was wasted, and Trina and Joss went back outside where Joss got sick. Then along came Dustin and Lulu to the deck where Lulu immediately sensed that Joss was drunk. Things will only get worse from here, as Joss and Cam will soon have some major consequences, but perhaps Dustin will see the drinking episode for what it was – two kids trying to cope with some pretty harsh life circumstances and make the pain go away for just a little while.

Finally, Curtis Ashford (Donnell Turner) had a talk with Jordan Ashford (Briana Nicole Henry), who needed a little attitude adjustment about her son TJ Ashford’s (Tajh Bellow) plan to ask Molly Lansing-Davis (Haley Pullos) to marry him. Curtis encouraged Jordan to open up about what was bothering her, and she admitted that she was concerned about TJ and Molly being young and the fact that they’ve only really dated each other.

Ultimately, Curtis got Jordan to see that she’s now said her piece to TJ, and that it was time to support him and let him live his life. Soon, TJ arrived and Jordan took the opportunity to tell him that she couldn’t be happier or prouder of him. Of course, it’s interesting that Jordan would have a problem with TJ’s choice of partner when she struggled so much with Stella Henry’s (Vernee Watson) problems with her in the past.