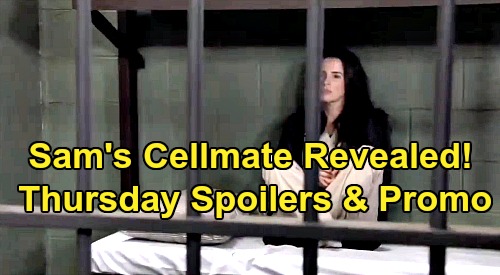 General Hospital (GH) spoilers for Thursday, October 31, tease that the Halloween festivities will continue. Before we get back to the spooky parties and creative costumes, let’s talk about Violet Finn (Jophielle Love) and her parents. Hamilton Finn (Michael Easton) had an adorable conversation with Violet about Roxy, and they seemed to get along quite well. However, it’s time to settle on where things go from here.

Finn will want to revisit their discussion in Thursday’s GH episode. He’ll ask Hayden Barnes (Rebecca Budig) what part he plays in Violet’s life, but it should really be up to Finn. Hayden’s deception shouldn’t exclude him from parenthood. Finn deserves the chance to be Violet’s dad, and he’ll get that chance based on General Hospital spoilers for the next couple weeks. It won’t be long until Finn and Violet have more opportunities to bond.

In the meantime, Curtis Ashford (Donnell Turner) will tell Jordan Ashford (Briana Nicole Henry) that it’s far from a done deal. T.J. Ashford’s (Tajh Bellow) ready to take a step forward in his relationship with Molly Lansing-Davis (Haley Pullos), but Jordan’s worried that they’re moving too fast. Her head’s spinning at the thought of a proposal, but Curtis may think they just need to let all this play out. A lot can happen between a proposal and a wedding – especially on a soap!

Over with Ava Jerome (Maura West), she’ll ditch the party and head back to the gallery. Ava will tell herself that things are starting to turn around, but she’ll soon face another round of terror.

A masked man from the party will follow Ava to the gallery, which will set up a dramatic confrontation. Ava will ultimately whip out her gun and demand that this mystery guy remove his mask. Will Nikolas Cassadine (last played by Nick Stabile) show Ava his face? General Hospital spoilers are certainly pointing in that direction, so stay tuned.

As for the teen scene, the gang will gather on The Haunted Star for the dance. Trina Robinson (Sydney Mikayla) will eventually tell Dev “Corbin” aka Dev Cerci (Ashton Arbab) that all she sees is him. How will Dev respond? He’s seemed far more interested in Josslyn Jacks (Eden McCoy) lately, but Joss will be busy getting into trouble with Cameron Webber (William Lipton).

Cam and Joss will sneak around as they work to uncover a mystery. Unfortunately, the liquor Cameron stole should come back to bite him. The same goes for Josslyn, who’ll get caught up in Cameron’s mess. Chaperones Dustin Phillips (Mark Lawson) and Lulu Spencer (Emme Rylan) will tackle a crisis by the end of the week, so Joss and Cam are about to get busted.

Until then, Laura Webber (Genie Francis) will focus on the codicil mission. She’ll tell Jasper “Jax” Jacks (Ingo Rademacher) that she has to be the one to bring Valentin Cassadine (James Patrick Stuart) down. Of course, Nina Reeves (Cynthia Watros) seems to be working on a plan of her own! It looks like Nina’s playing Valentin, but she’ll concentrate on making more waves for Sasha Gilmore (Sofia Mattsson) this Thursday.

Nina already lashed out at her former fake daughter, but she’ll be prepared to go another round. It turns out Willow Tait (Katelyn MacMullen) will intervene, which is fitting since there’s a good chance Willow is Nina’s true biological child. While Willow blasts Nina, Neil Byrne (Joe Flanigan) will pay Alexis Davis (Nancy Lee Grahn) a visit at GH. He’ll have a confession to make, so this may be something that brings them closer.

Finally, Sam McCall (Kelly Monaco) will meet her dangerous cellmate. It seems likely Cassandra Pierce (Jessica Tuck) will be Sam’s new roomie, so some tense scenes should be coming up! We’ll give you updates as other GH news emerges. Stick with the ABC soap and don’t forget to check CDL often for the latest General Hospital spoilers, updates and news.