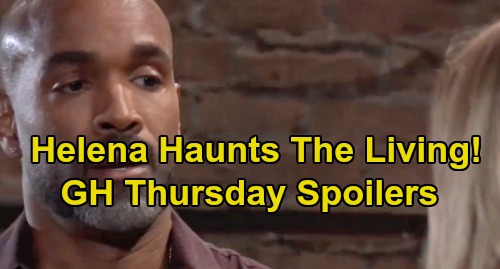 General Hospital (GH) spoilers for Thursday, September 12, tease that Nina Reeves (Cynthia Watros), Valentin Cassadine (James Patrick Stuart) and Liesl Obrecht (Kathleen Gati) will have a reason to celebrate. After Sasha Gilmore’s (Sofia Mattsson) release from GH, Nina will reflect on how blessed she is to still have her daughter in her life. She’ll join Valentin and Liesl in rejoicing over that as she prepares for the future.

Things looked bleak for a while, but Sasha pulled through and will have to make some tough decisions soon. One of those involves whether she’ll keep her promise to tell Michael Corinthos (Chad Duell) the truth. Sasha will also have to deal with Liesl, who’ll suggest they’re in this together now. Dr. O won’t want Sasha blowing up Nina’s world, so she’ll count on her silence.

Liesl’s warning could play a role in what Sasha ultimately decides to do about Michael. She’ll start to come clean on the new GH episode Friday, September 13, but we’ll see if she actually confesses. As for Nina, she’ll ask if Valentin’s ready for this. She could mean their upcoming wedding, which will be back on track thanks to Sasha’s recovery and release.

Valentin is beyond ready to marry Nina, but that Sasha secret will weigh on him heavily. He knows he’s just one secret away from losing Nina, so that’ll continue to be a source of stress. Meanwhile, Laura Webber (Genie Francis) will talk to Curtis Ashford (Donnell Turner). He’s hoping to find out everything there is to know about Helena Cassadine (Constance Towers), so Laura will do her best to fill him in.

General Hospital spoilers say Laura will have some words of caution. She’ll note that Helena’s reach can extend beyond the grave, and GH fans have seen the perfect example of that with Peter August (Wes Ramsey). His old connection to Helena is what set his latest round of destruction in motion.

Over with Dev Cerci (Ashton Arbab), it seems he’ll worry about Josslyn Jacks (Eden McCoy). Having Dev living in the same home as been an adjustment, and now he’s invading her territory at school, too. Dev may think he’s stressing Joss out in some ways and adding to her pain, but Sonny will offer reassurance. He’ll insist “she” would be going through the same thing with or without Dev, so it sounds like he’ll be talking about Josslyn here.

Meanwhile, Carly Corinthos (Laura Wright) will confront Josslyn about ditching school and ignoring her attempts to get in touch. She’ll get that Joss is going through a lot, but she won’t be on board with cutting off communication. Carly needs to be able to reach her daughter. Josslyn may feel like Carly’s being overprotective, but Carly will point out a lot of people want what they have.

Carly may point out that being close means caring to an extreme, which can bring some clashing. Even so, they’ll manage to sort this out and keep their strong bond intact. Across town, Jasper “Jax” Jacks (Ingo Rademacher) will declare that he’s Aurora’s sole remaining CEO. He tried to get Sam McCall (Kelly Monaco) on board with coming back to the company and handling Drew Cain’s (Billy Miller) end of things. Unfortunately, Sam is too overwhelmed to tackle the task.

As a result, Jax seems poised to take over the rest of the company for now. It’s a big job, but Jax is qualified and has what it takes to steer the whole ship. He’ll likely vow to make Drew proud and preserve Aurora’s legacy.

Elsewhere, Julian Jerome’s (William deVry) course will be altered. He’ll get some advice from Ava Jerome (Maura West) that makes him rethink his strategy. General Hospital spoilers say Brad Cooper (Parry Shen) will get the assistance he needs, so Julian may agree to kill Liesl. It’s a risky decision, but Julian may feel backed into a corner.

Another exciting episode’s ahead, so don’t miss all the action. We’ll give you updates as other GH news comes in. Stay tuned to the ABC soap and don’t forget to check CDL often for the latest General Hospital spoilers, updates and news.