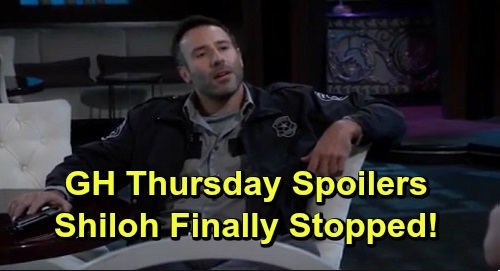 General Hospital (GH) spoilers for Thursday, September 26, tease that Neil Byrne (Joe Flanigan) will face some awkward moments with Alexis Davis (Nancy Lee Grahn). In fact, these two seem to live in a permanent state of awkwardness! However, Neil will joke that the tables have turned as they try to push through it. They just have to keep getting to know each other and focus on the spark they’ve found.

Over with Julian Jerome (William deVry), he’ll be heartbroken over everything that happened with Kim Nero (Tamara Braun). Julian’s devastation came with some anger, so he’ll lash out at Ava Jerome (Maura West) on Thursday. He’ll suggest it’s time for Ava to say “I told you so,” but it’s doubtful she’ll take advantage of the opportunity. Ava would rather comfort her brother, even if she doesn’t know exactly what advice to offer.

Other General Hospital spoilers say Hayden Barnes (Rebecca Budig) will get some shocking news. She’ll learn Curtis Ashford (Donnell Turner) brought Laura Webber (Genie Francis) into their codicil hunt, so she’ll naturally have concerns. Nevertheless, Curtis will insist Laura is trustworthy and was given very little information. He’s keeping things on a need-to-basis as much as he can, but they really need Laura’s assistance on this.

While Curtis works to convince Hayden of that, Valentin Cassadine (James Patrick Stuart) will reassure Nina Reeves (Cynthia Watros). He’ll promise that nothing will stand in the way of them becoming husband and wife, but perhaps Valentin shouldn’t be so certain! Sasha Gilmore (Sofia Mattsson) – the fake daughter herself – is the biggest threat in all of this.

GH spoilers say Sasha will make a bold declaration on Thursday. During a conversation with Michael Corinthos (Chad Duell), Sasha will insist she wants to tell Nina the truth. She’ll think Nina should know the whole story, but Michael may push her to stick to the plan. He wants Sasha to lawyer up and be fully prepared before they move forward.

Regardless, Nina will remain blissfully unaware based on General Hospital spoilers for next week. In the meantime, Peter August (Wes Ramsey) will get grilled by Maxie Jones (Kirsten Storms). She’ll want to know why Peter was on the docks – and she might mention that receipt she found as well. Maxie knows Peter needed a ton of cash in a hurry, so she may assume that was connected to his pier adventure.

It looks like Peter will wiggle out of this tight spot, but he’ll only be delaying the inevitable. It’s just a matter of time until Maxie finds out the dark plots her boyfriend’s capable of. On The Haunted Star, Shiloh Archer (Coby Ryan McLaughlin) will want to finish Jason Morgan (Steve Burton) off. He’ll hold his weapon over Jason and contend that he’s waited so long for this.

Jason thought this Shiloh nightmare was over after he came to Sam McCall’s (Kelly Monaco) rescue. Will this be Sam’s chance to return the favor? Since she’s the only other person there, it looks like Sam will reappear to prevent Jason’s murder and stop Shiloh’s reign of terror.

Finally, Harrison Chase (Josh Swickard) will take a stretcher to GH. It sounds like Shiloh will be on it! General Hospital spoilers say another action-packed episode’s on the way, so stay tuned for more drama. We’ll give you updates as other GH details emerge. Stick with the ABC soap and don’t forget to check CDL often for the latest General Hospital spoilers, updates and news.