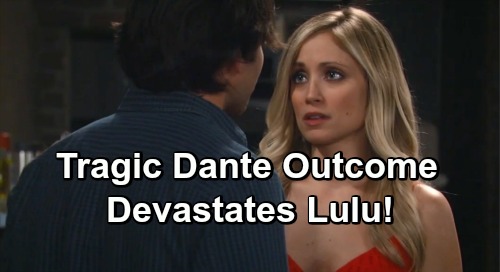 General Hospital (GH) spoilers tease that Maxie Jones (Kirsten Storms) will move forward with her plan to track down Dante Falconeri (Dominic Zamprogna) and heal his marriage. She knows Lulu Falconeri (Emme Rylan) misses Dante terribly, so she just wants to make this reunion happen and hopefully bring the couple some peace. Alas, that’s not where this story’s headed!

GH fans can expect some big twists in this hot plot. It’s all building to an outcome that’s unexpected – and most likely unpleasant. Whenever a character is repeatedly warned something is a bad idea, it usually turns out to be true. Peter August (Wes Ramsey) doesn’t have a good feeling about Maxie’s scheme, which is a tell-tale sign that it’ll end in catastrophe.

Of course, it’ll be interesting to see what that catastrophe looks like. General Hospital must have a good reason for doing this storyline, and the reason is most likely closure. Lulu was stuck in limbo before Dante came back from his mission. He quickly put her there again when he left for deprogramming.

Without a love interest, there just aren’t many story opportunities for Lulu. This is the show’s chance to change that. The question is: Will Dante come back as part of this closure? Around the time of Dominic Zamprogna’s last departure, he gave an interview to Soap Opera Digest. Zamprogna certainly didn’t rule out other brief return stints like this last one.

“I hope the fans enjoyed it, and hopefully we’ll get to do it again,” Zamprogna said at the conclusion of his arc. He added that “we’ll see what happens from here.” SOD also had a recent blind item that revealed one soap was bringing back a fan favorite. It’s possible Dante will reenter the picture briefly after Maxie makes a mess.

General Hospital spoilers say Peter will do his best to help despite his concerns. He’ll get Mac Scorpio (John J. York) involved on June 17, which will lead to some huge news. Robert Scorpio (Tristan Rogers) also has some meetings with Sonny Corinthos (Maurice Benard) coming up, so Maxie’s efforts could affect several people.

There’s a chance Maxie’s plan will push Dante too hard. He may feel hopeless and disappear knowing that Lulu might not move on otherwise. Just because Dante might conclude his treatment doesn’t mean he’ll be the same man. If GH makes it so Dante just vanishes for now, Zamprogna wouldn’t be needed for that story.

On the other hand, General Hospital could bring Dante back to have a deeper conversation with Lulu. If his mind still feels broken, Dante may file for divorce and insist that there’s no hope for their future. Maxie’s upcoming moves could speed that along instead of a “Lante” reunion.

Whatever the case, General Hospital spoilers state that Maxie may regret her actions in the end. Will Lulu and Maxie’s friendship take another hit? Will Dante appear onscreen for the conclusion of this story? We’ll give you updates as other GH details emerge. Stay tuned to the ABC soap and don’t forget to check CDL often for the latest General Hospital spoilers, updates and news.