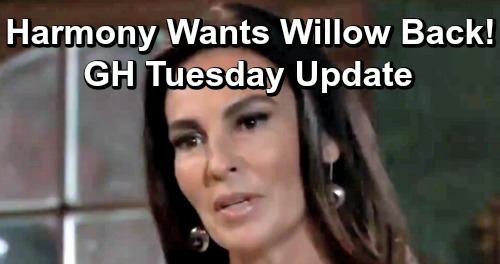 General Hospital (GH) spoilers update for Tuesday, April 23, tease that Sam McCall (Kelly Monaco) will keep inching her way into Shiloh Archer’s (Coby Ryan McLaughlin) inner circle. Shiloh just assured Sam that she’d be ready to join “The Trust” soon. He’ll fill Sam in on the next few steps to get there, so she’ll stick to the plan and hope she can gain an advantage.

Meanwhile, Kristina Corinthos-Davis (Lexi Ainsworth) will lash out at her loved ones. Michael Corinthos (Chad Duell) seemed to be making progress with Kristina, but there’ll be a setback on Tuesday. Kristina will refuse to turn against Shiloh and the community that passes no judgment. This intervention will end with Kristina’s explosive outburst, so her family will just have to be patient.

Next, Kristina will get her hands on her mom’s phone. Alexis Davis’ (Nancy Lee Grahn) carelessness will give Kristina an opportunity to reach out. She’ll choose to get in touch with Valerie Spencer (Paulina Begumbe), but she won’t be able to share much information. However, Kristina will at least let Valerie know she needs some help.

Over with Molly Lansing-Davis (Haley Pullos), she’ll get grilled about her sister’s disappearance. Valerie will team up with Harrison Chase (Josh Swickard) as they look into where Kristina might’ve vanished to – and most importantly, who’s responsible. GH spoilers say Molly will divulge Alexis’ claims. She’ll note that Kristina supposedly took off on her own and plans to clear her head outside of PC.

General Hospital spoilers still point to Willow as the most probable bio daughter candidate for Nina Reeves (Michelle Stafford). That bomb should drop much later, but Willow will have enough on her plate for now. You can bet Harmony will try to coax Willow back to DoD, but that’s the absolute last place Willow wants to go.

Next, T.J. Ashford (Tajh Bellow) will face off with Jordan Ashford (Briana Nicole Henry). He may grow concerned about Jordan’s health woes and how much she’s working. Jordan has showed no signs of slowing down despite her worsening condition. Unfortunately, Jordan’s kidney issues will take even more of a toll next week.

Other General Hospital spoilers say Ryan Chamberlain (Jon Lindstrom) will continue to cause chaos. There isn’t undeniable proof that he’s alive, but it sure looks that way – especially to Ava Jerome (Maura West). She’s fully convinced that Ryan’s out there, so she wants to track him down and kill him herself.

Franco Baldwin (Roger Howarth) and Scott Baldwin (Kin Shriner) refused to be part of Ava’s plan, but there’s one other fake boyfriend option. Ava will try to sell Dr. Kevin Collins (Jon Lindstrom) on her plot this Tuesday. She’ll stand by her statement that they can use Ryan’s hand to bury him. Ava will explain how and hope that Kevin will pretend to be in love with her, but he’ll reject the idea at first.

Luckily, a conversation between Laura Webber (Genie Francis) and Felicia Scorpio (Kristina Wagner) will be a game-changer. After Felicia makes Ava’s case, Laura will see the potential for closure and healing. She’ll think Kevin can put his guilt to rest if he joins forces with Ava and stops Ryan’s threat.

Finally, Curtis Ashford (Donnell Turner) will put his focus on Canada and what he might discover there. General Hospital spoilers say some new clues are coming up, so stay tuned. We’ll give you updates as other GH news emerges. Stay tuned to the ABC soap and don’t forget to check CDL often for the latest General Hospital spoilers, updates and news.