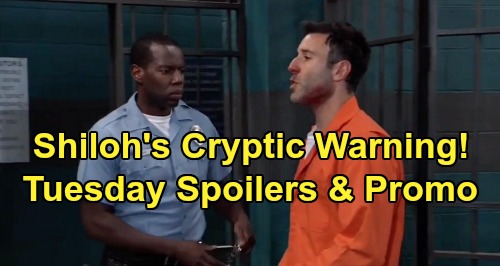 General Hospital (GH) spoilers for Tuesday, August 20, tease that Hayden Barnes (Rebecca Budig) will have some bad news for Jasper “Jax” Jacks (Ingo Rademacher). She’ll insist there’s been a complication in their project – and her name is Liesl Obrecht (Kathleen Gati)! Hayden was forced to bargain with Liesl after she got caught snooping at Wyndemere, so Jax will keep a promise she made for him.

Jax should be annoyed when he learns he’ll have to have dinner with Liesl, but it’s better than her ratting them out. Hayden may suggest Jax should just go be his usual charming, handsome self. Liesl’s under Jax’s spell, so he should have no problem keeping her quiet.

Of course, Liesl will have some prep work to do before their night together. She’ll seek assistance from Maxie Jones (Kirsten Storms), who’ll be taken aback to learn Liesl has a date. General Hospital spoilers say Maxie will be even more surprised when she hears it’s Jax. She’ll naturally think something’s up, but it looks like she’ll help Liesl get her glam on anyway.

As for Peter August (Wes Ramsey), he’ll get a phone call that’s disturbing. Peter should be a bit rattled thanks to the updates he hears. We’ll see if Peter confides his fears to Maxie or chooses to keep them to himself.

At GH, Kim Nero (Tamara Braun) will officially turn in his notice and announce that she’s leaving Port Charles. Monica Quartermaine (Leslie Charleson) may ask if Kim’s sure about this. As Oscar Nero Quartermaine’s (Garren Stitt) mother, they consider her part of the family now. Monica will hate to see Kim go, but she should understand why this mourning mom has to get away from all the painful memories.

Over with Scott Baldwin (Kin Shriner), he’ll have a plan that’s sure to cause trouble. Scott will hint that he has a workaround of some sort. He’ll fill Drew Cain (Billy Miller) and Curtis Ashford (Donnell Turner) in, but he won’t think Franco Baldwin’s (Roger Howarth) going to like this. Franco has Drew’s mindset at the moment, so it’ll be tough to sell him on much of anything related to his new life.

Next, Josslyn Jacks (Eden McCoy) will make a shocking suggestion to Carly Corinthos (Laura Wright). She’ll contend that maybe they should forget about school altogether, so she’ll undoubtedly mean school for Dev Cerci (Ashton Arbab). During Joss and Dev’s recent chat, she was surprised by how much he’d learned on the streets. Dev opened up about how he’d managed to educate himself, so Josslyn may think he should continue learning his way.

However, Carly will likely point out that Dev has support now and should go after this opportunity. He has a shot at a real education that could help him go far, so she may argue that he shouldn’t pass that up. Dev’s living under Carly and Sonny Corinthos’ (Maurice Benard) roof, so he’ll have to follow their rules – and going to school is one of them.

Meanwhile, Sonny will ask Jason Morgan (Steve Burton) how his new hire’s working out. Dev’s certainly eager, but he’s quite a wildcard. Jason may still have some concerns about Dev causing issues for them, but Sonny seems to think it’ll all work out. He’s invested in giving this kid a true chance to succeed.

Before Shiloh Archer (Coby Ryan McLaughlin) is transported to Pentonville, he’ll leave Franco with something to think about. Shiloh’s hoping Franco will reveal where his money is in exchange for the name of Helena Cassadine’s (Constance Towers) mysterious accomplice. Franco isn’t interested, but Shiloh will warn it’s a mistake to ignore this deal. He’ll insist there’s so much more Franco doesn’t know.