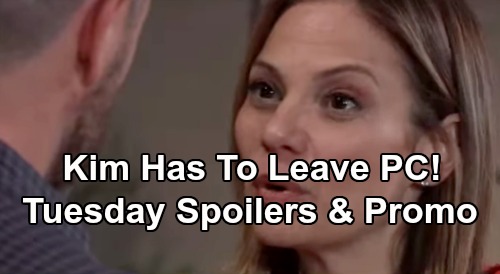 General Hospital (GH) spoilers for Tuesday, August 6, tease that Alexis Davis (Nancy Lee Grahn) will realize she’s crossed the point of no return with Neil Byrne (Joe Flanigan). She tried to talk him out of dropping her as a patient, but it seems his mind is made up. They’re closing the door on interacting in a therapy setting, but maybe this will open a romantic window.

Over with Molly Lansing-Davis (Haley Pullos), she’ll wonder what’s up when T.J. Ashford (Tajh Bellow) wants to discuss something with her. T.J. will note that this is about Molly’s future. He’ll apparently have some big plans for his girlfriend, so Molly should be curious about what’s in store.

Other General Hospital spoilers say Maxie Jones (Kirsten Storms) will fret over her bestie’s struggles. She’ll tell Peter August (Wes Ramsey) that her heart breaks for Lulu Falconeri (Emme Rylan), who’s trying to come to grips with losing Dante Falconeri (Dominic Zamprogna) – possibly forever. Maxie will wish there was something she could do to help, but perhaps time is the only thing that can right now.

Time certainly appears to be helping Josslyn Jacks (Eden McCoy), who’s been drowning in grief for a while now. She’s had some rough moments since Oscar Nero Quartermaine’s (Garren Stitt) death, but she’ll have some brighter ones on Tuesday. Josslyn will smile as she tells Cameron Webber (William Lipton) and Trina Robinson (Sydney Mikayla) she knows exactly what to do.

It looks like Josslyn’s heart is slowly healing, so that’s great news for this tough teen. Next, Kim Nero (Tamara Braun) will drop a bomb on Julian Jerome (William deVry). She’ll insist that she has to leave Port Charles now, so Julian will undoubtedly try to talk her out of it. He loves Kim and doesn’t want to lose what they have together.

However, Kim’s in plenty of General Hospital spoilers for next week – including one about meeting Lucy Coe (Lynn Herring) with Julian. Since Julian’s interested in purchasing the old Dawn of Day home, he’ll talk to Kim into moving in with him there. In the meantime, Sonny Corinthos (Maurice Benard) will have a chat with his son. He’ll give Michael Corinthos (Chad Duell) some good advice and hope it helps.

Elsewhere, Drew Cain (Billy Miller) and Curtis Ashford (Donnell Turner) will agree that everything goes back to Shiloh Archer (Coby Ryan McLaughlin). They’ll naturally worry about big trouble for “JaSam.” Sam McCall (Kelly Monaco) is currently tied up and trapped, so she’s definitely in need of help. The same goes for Jason Morgan (Steve Burton), who’s being forced into a risky procedure.

Drew knows some memory mayhem must be going down, so he’ll leap into action with Curtis and get Sonny involved, too. General Hospital spoilers say they’ll race to the motel and try to thwart Shiloh’s desperate plot. Back with Shiloh, he’ll get beat up for the umpteenth time. Jason will punch his enemy to the floor, but he may go along with Shiloh’s demands – or at least pretend to.

GH fans can expect Jason to work on a sneaky strategy. He may have no choice since his brain damage doesn’t make him a qualified memory-mapping candidate. Jason may stall until Drew and the others arrive, but Sam will still be in a dire situation. It looks like Franco Baldwin (Roger Howarth) will get caught up in this chaos sooner or later, and he may be the one who finds himself with Drew’s memories.