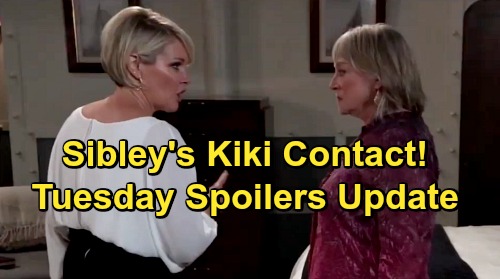 General Hospital (GH) spoilers update for Tuesday, July 9, tease that Cameron Webber (William Lipton) will make a shocking discovery. With Trina Robinson (Sydney Mikayla) and Josslyn Jacks (Eden McCoy) by his side, Cam will notice someone has gone overboard. He’ll see a partygoer struggling in the water and insist they have to get this person some help.

Of course, GH fans know Liesl Obrecht (Kathleen Gati) is the one who took a tumble. Someone shoved Liesl into the water, so she was forced to take a frightening swim. Thankfully, Liesl will be pulled to safety before this night turns deadly. She’ll dry off and ponder who might’ve given her that push.

General Hospital spoilers say there are two main suspects at the moment. One of them is Brad Cooper (Parry Shen) and the other is Valentin Cassadine (James Patrick Stuart). However, it’s worth mentioning that Valentin will have some minutes unaccounted for. Nina Reeves (Cynthia Watros) will be quite curious where Valentin’s been and what he’s been up to.

Meanwhile, Kim Nero (Tamara Braun) will take drugged Drew Cain (Billy Miller) to a room away from the crowd. She’ll want privacy since she apparently plans on raping Drew to get pregnant. Drew will be disoriented as Kim tells him to sit back and let her take care of everything. Kim can’t let go of this baby dream, so she’ll hope this will achieve her goal.

However, it doesn’t look like Kim will actually resort to sexual assault. General Hospital spoilers say Julian Jerome (William deVry) will barge in somewhere and demand to know what’s going on. He might find Kim just before she gets started. Kim herself could even battle guilt and shut this down. Either way, Drew will show compassion on Tuesday and that may mean not holding this incident against Kim.

Over with Hayden Barnes (Rebecca Budig), she’ll mix and mingle with familiar faces. Elizabeth Baldwin (Rebecca Herbst) will let Hayden know she’s thrilled to see her. Hayden is one of the last people Liz ever expected to show up, so this is certainly a nice surprise.

Curtis Ashford (Donnell Turner) will also catch up with Hayden, but she obviously won’t spill the news about her secret child just yet – even to Hamilton Finn (Michael Easton). Liz will talk about more going on than meets the eye, so that’ll probably tie in with some Port Charles updates. Hayden’s missed a lot since she was last in town, but Finn’s missed a great deal of his son or daughter’s childhood, too.

Finn will have to hear about his kid at some point, so Hayden may try to find the right time to tell him soon. She’s back with an agenda, so we’ll see if her child is connected to that. Elsewhere, Ava Jerome (Maura West) will lash out at her psychic. Sibley Gamble (Veronica Cartwright) could feel Kiki Jerome’s (Hayley Erin) presence in the room where her soul left her body, but the feeling will pass.

When Ava realizes Sibley won’t be able to communicate with Kiki, she’ll fly into a rage. Ava will shout that they’re not going anywhere until Sibley gets her daughter back. Unfortunately, that’s not how it works. Sibley already told Ava she can’t really control the process. She can only put herself in an environment that’s conducive to reaching out and hope for the best.

Perhaps Sibley will suggest trying again later or come up with some other way to get in touch. Whatever the case, Sibley still has a few more episodes left in her stint. It’ll be interesting to see what other developments come out of this mission to contact Kiki.

Finally, Maxie Jones’ (Kirsten Storms) plot will press on. She intends to do everything in her power to reunite Lulu Falconeri (Emme Rylan) with her husband. It may not even be safe for Dante Falconeri (Dominic Zamprogna) to come home, but Maxie doesn’t seem to care about that. She’ll tell Peter August (Wes Ramsey) that she won’t take no for an answer this time, so she’ll definitely move forward.