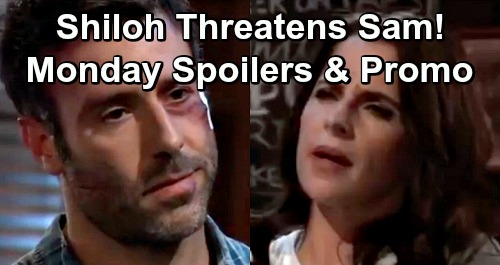 General Hospital (GH) spoilers for Tuesday, June 11, tease that Harrison Chase (Josh Swickard) will have to break some bad news to Willow Tait (Katelyn MacMullen). When she asks what’s wrong, Chase will tell her that Shiloh Archer (Coby Ryan McLaughlin) got off the hook. Willow won’t be surprised since she knows how Shiloh operates, but her fears about “Wiley Cooper-Jones” will once again rev up.

Meanwhile, Shiloh will gloat to Sam McCall (Kelly Monaco). Her encounter with Shiloh will leave her rattled, but she won’t him have the satisfaction of seeing it. Instead, Sam will do her best to stand tall. She’ll wonder what else Shiloh could possibly have to say to her. Sam heard plenty throughout the con she was running, but everything out of Shiloh’s mouth was a lie or some sort of manipulation tactic.

However, Shiloh will undoubtedly have a threat or two to deliver. He’ll leave Sam even more shaken up than before, but Jason Morgan (Steve Burton) will calm her down later. GH fans know Jason always whatever it takes to protect Sam. He’ll refuse to let Shiloh cause Sam any more distress, so let’s hope Jason can keep his word.

Of course, there’d be an easy way for Jason to get rid of the problem and that’s murder. He certainly wouldn’t have any qualms about killing Shiloh, but Chase is hoping Jason and Sonny Corinthos (Maurice Benard) will stick to lawful strategies. Since Shiloh just wiggled out of trouble, General Hospital spoilers say Jason won’t be interested in going through the system. He’d rather just act now!

As they discuss the topic of taking Shiloh out, Jason will tell Sonny that he just wants to do it and get it done. He’ll be tired of waiting for Shiloh to pay the price. Sonny will at least consider taking deadly against Shiloh, but he’ll have to be smart about it. He won’t want Jason just running off to pump a bullet in Shiloh without thinking it through first.

Other General Hospital spoilers say Kristina Corinthos-Davis will have another chat with Sonny. She’ll contend that Sonny needs to let her stand on her own. Kristina will appreciate how much her father cares, but she won’t want him going to extremes for her sake. She’d rather watch Shiloh go down in court than face Sonny’s lethal wrath.

Elsewhere, Alexis Davis (Nancy Lee Grahn) will open up to Dr. Neil Byrne (Joe Flanigan). It looks like they’ll talk about the Shiloh situation, so Neil will want to know what Alexis plans on doing. Unfortunately, there isn’t much Alexis can do except try not to freak out. She may worry about what Sonny and Jason have in store, but there may be part of her who wouldn’t mind the deadly aftermath.

Finally, Maxie Jones (Kirsten Storms) and Peter August (Wes Ramsey) will chat about love. Maxie will suggest that it’s something you don’t give up on. When you find love, you have to grab it and fight for it. Peter will be glad that Maxie taught him what love really is, so they’ll share some warm moments as they prepare for a bright future together.