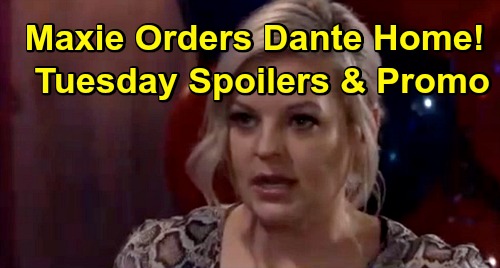 Of course, this isn’t the ideal plan since Dante left to be deprogrammed. There was legitimate danger to the people he loves, so it’s not a good idea to bring him back before he’s ready. Nevertheless, Maxie’s efforts will press on and result in a surprising new lead.

Lulu Falconeri’s (Emme Rylan) latest story at The Invader will move forward as well. She’ll tell someone she’s “exactly that kind of woman,” so this may tie in with her article somehow. Mac will think Lulu’s story sounds awfully risky since she’s trying to catch a thief. He’ll chew Peter out for letting Lulu do something like this and wonder if Peter would also put Maxie in this kind of peril.

Other General Hospital spoilers say Julian Jerome (William deVry) will react to Kim Nero’s (Tamara Braun) request. Kim asked Julian to make a baby with her, but he may think the timing’s off. Tuesday’s preview video shows Julian suggesting that it could be the best thing that ever happened to him. However, he might add that Kim’s mourning and shouldn’t be making major life decisions right now.

Over with Margaux Dawson (Elizabeth Hendrickson), she’ll meet up with Drew Cain (Billy Miller) and ask for a favor. There’s no word yet on what Margaux has in mind, but Drew should at least consider it. Could this have something to do with Shiloh Archer (Coby Ryan McLaughlin)? GH really needs to start playing up Drew’s old connection to Shiloh and get him involved in that storyline.

Next, Carly Corinthos (Laura Wright) will try to help a struggling Josslyn Jacks (Eden McCoy). If Joss admits she tried to have a séance, Carly may sense that her daughter’s grief is too overwhelming. Regardless, Carly will argue that counseling wouldn’t be a bad idea. She’ll hope Josslyn’s willing to give therapy a shot and try to work through her feelings in a healthy way.

Finally, Sonny Corinthos (Maurice Benard) will announce that they have a problem. Since Sonny’s so linked to the Shiloh story at the moment, his declaration may involve the creepy cult leader. Sonny really wants Shiloh dead, but he’s respecting Kristina Corinthos-Davis’ (Lexi Ainsworth) wishes for now.

Sonny and Jason Morgan’s (Steve Burton) will concentrate on a non-lethal plot, but it looks like some snags will strike soon. General Hospital spoilers say there’s much more Dawn of Day drama ahead. We’ll give you updates as other GH news emerges. Stay tuned to the ABC soap and don’t forget to check CDL often for the latest General Hospital spoilers, updates and news.