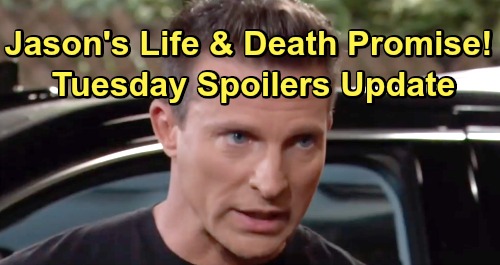 General Hospital (GH) spoilers update for Tuesday, June 25, tease that Cameron Webber (William Lipton) will have some questions. He’ll approach Josslyn Jacks (Eden McCoy) and Dev (Ashton Arbab) to sort through the facts. Cam will admit he heard Dev robbed Lulu Falconeri’s (Emme Rylan) place, so he’ll wonder why Joss is hanging out with the guy.

Josslyn will note that there was some confusion. She’ll clear things up as far as the robbery goes, but will she share Dev’s secret? The plan is for Dev to pose as Sonny Corinthos’ (Maurice Benard) cousin for the summer, but he’s really trying to avoid deportation. It’ll be interesting to see how much Joss divulges.

As for Sonny, he’ll keep working on a way to keep Dev out of danger. Sonny will tell Carly Corinthos (Laura Wright) about some new strategy on Tuesday. It seems he’ll have an idea about how Dev can stay in Port Charles indefinitely. Since Dev came through for Sonny in Turkey, this is Sonny’s chance to return the favor.

Other General Hospital spoilers state that Jason Morgan (Steve Burton) will offer reassurance. He’ll vow not to let anything happen to someone, so Carol Lockhart might be listening. Carol obviously won’t just blurt out everything Michael Corinthos (Chad Duell) wants to know. Jason might have to step up and assure Carol that Shiloh Archer (Coby Ryan McLaughlin) won’t come after her.

That seems like a risky promise to make, but Jason is a dangerous man when he needs to be. He should feel confident that he can keep his word. Over with Drew Cain (Billy Miller), he’ll inadvertently make the wrong impression. Kim will urge Drew to help her keep Oscar Nero Quartermaine (Garren Stitt) alive, so Drew might be on board with that plan.

Of course, Drew may think Kim means starting scholarships, camps and whatever else will keep Oscar’s name out there. Kim will actually mean she wants to have a baby with Drew, so they won’t be on the same page. GH spoilers say Drew will be taken aback by Kim’s kiss. These former flames and grieving parents will have a lot to work through.

Meanwhile, some courtroom chaos will go down. Willow Tait (Katelyn MacMullen) was just ordered to disclose all information regarding the baby she gave up for adoption. That’s not something Willow wants to do, so she may put up a fight. Willow will certainly lash out at the judge on Tuesday. She’ll suggest that if he wants her to say it, she’ll say it.

However, “it” may not be “Wiley Cooper-Jones’” name. Instead, Willow might hurl insults at Shiloh the cult leader who raped her. She may find herself in contempt of court, which could lead to her arrest. Harrison Chase (Josh Swickard) will take someone shocking into custody on Tuesday. Who would be more shocking than his own girlfriend? Poor Chase may have to handcuff poor Willow!

Bobbie will feel like Julian just lost “Wiley” for all of them. She’ll contend that when this all blows up, it’ll be Julian’s fault. Julian will undoubtedly defend his actions, but Bobbie will keep at it. She’ll work herself into a tizzy and end up fainting later. Bobbie’s collapse should cause plenty of concern, but she’ll want the focus to stay on “Wiley” and his family.

It sounds like another fantastic episode’s on the way. We’ll give you updates as other GH news comes in. Stick with the ABC soap and don’t forget to check CDL often for the latest General Hospital spoilers, updates and news.