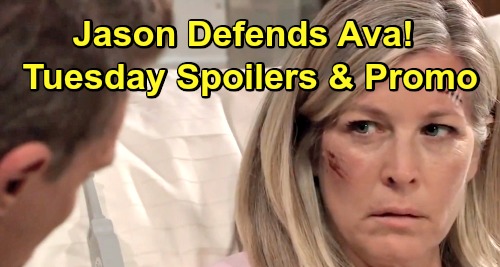 General Hospital (GH) spoilers for Tuesday, March 12, tease that Maxie Jones (Kirsten Storms) will be ready for some answers. She’ll tell Peter August (Wes Ramsey) that the sooner they get the DNA samples to the lab, the better. The first DNA test was a flop, but Maxie’s certain she’s got the right sample this time around.

Maxie considered leaving all this alone and just letting Nina Reeves (Michelle Stafford) be happy, but she at least thinks she should learn the truth first. Once she finds out if Sasha Gilmore (Sofia Mattsson) is Nina’s daughter, she can make her next choice. Unfortunately, Maxie’s plans may go awry thanks to Sasha’s warning and Valentine Cassadine’s (James Patrick Stuart) sneakiness.

Sasha knows something’s up since Maxie plucked a hair out while she was chatting with Michael Corinthos (Chad Duell). She suspects Maxie’s seeking proof, so General Hospital spoilers say she’ll fill Valentin in and give him a chance to work his magic. Valentin will assure Sasha that he can take care of it, but he’ll have to think fast when Nina overhears that part of the conversation.

Of course, Valentin can just make up a story that involves a wedding gift or some other arrangements for the nuptials. It should be easy to throw Nina off the trail.

Over with Drew Cain (Billy Miller) and Dr. Kim Nero (Tamara Braun), they’ll have a proposal for Oscar Nero (Garren Stitt) to consider. They may push Oscar to reveal his whereabouts at all times from now on and offer an incentive in return.

Oscar will grin as he agrees to their deal, so let’s hope his recent dangerous trip was his last. At Charlie’s Pub, Michael will look at a cell phone as Willow Tait (Katelyn MacMullen) stands nearby. Michael will learn something surprising, so he’ll jokingly wonder what else Brad is keeping from him. You can bet Brad will be on edge over the baby swap he’s hiding!

Later, GH spoilers state that Brad will bicker with Willow. Michael could end up caught in their argument eventually, so Brad should be stressed to his limit. At the hospital, Jason Morgan (Steve Burton) will make sure Carly Corinthos (Laura Wright) gets the help she needs. They’ll naturally want to know if the baby’s going to be OK.

Ava Jerome’s (Maura West) name will also come up during their conversation. Carly may fume about Ava leaving her in that car trunk and allowing Ryan Chamberlain (Jon Lindstrom) to dump her miles away. However, it seems Jason will defend Ava and urge Carly to see things from her perspective. He might point out that Ava was terrified and completely baffled by “Kevin’s” behavior.

Besides, Carly wouldn’t have been found without the details Ava provided. Jason knew where to search thanks to Ava, so she saved Carly’s life. Finally, Sonny Corinthos (Maurice Benard) will track someone down and insist that he needs information. He’ll think this is just the man to get it for him.

Sonny will hope he can get a step closer to confronting Raj Patel and rescuing Dante Falconeri (Dominic Zamprogna). General Hospital spoilers say this storyline is about to heat up, so stay tuned for all the action. We’ll give you updates as other GH news comes in. Stick with the ABC soap and don’t forget to check CDL often for the latest General Hospital spoilers, updates and news.