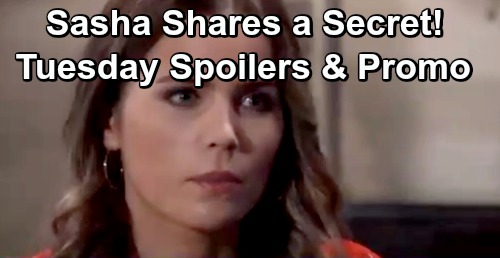 General Hospital (GH) spoilers for Tuesday, May 14, tease that Maxie Jones (Kirsten Storms) will wonder if there are any more surprises in store. Her date with Peter August (Wes Ramsey) certainly hasn’t gone the way either of them thought it would. Maxie’s encounter with Laura Webber (Genie Francis) and Curtis Ashford (Donnell Turner) was likely the biggest shocker of all.

Nevertheless, Peter and Maxie will hope to get things back on track. GH is dragging this out a bit, but they should make love soon. Whether it happens now or in the not-too-distant future, Maxie and Peter seem destined to hit the sheets at some point.

Over with Robert Scorpio (Tristan Rogers), he’ll realize he’s got a huge problem on his hands. Dr. Hamilton Finn’s (Michael Easton) engagement ring is gone! GH fans know Mike Corbin (Max Gail) scooped it up last week, but Robert will remain in the dark on that. He’ll just know he’ll be in big trouble when Finn finds out.

Once Felicia Scorpio (Kristina Wagner) gets updates on the situation, she’ll suggest maybe Robert subconsciously lost the ring on purpose. Felicia will think Robert as unresolved feelings for Anna Devane (Finola Hughes) that he needs to address. Robert will mainly be focused on getting that ring back, but he’ll quickly realize another option might be his only hope.

Mac Scorpio (John J. York) will help Robert find a replacement ring while Felicia talks to Anna. She’ll be curious about Anna’s true feelings for Finn and Robert. Felicia likes them both, so she’ll just want to make sure Anna chooses the right man for her. However, Felicia will manage to make an even bigger mess. She’ll leave Anna with all kinds of doubts and worries that need to be addressed.

Anna will also confront Finn about Jordan Ashford’s (Briana Nicole Henry) condition on Tuesday. She’ll be upset with Finn for concealing how serious it is, but Finn will defend his actions. It’s not like Anna has a right to know all Jordan’s medical details anyway, but Finn may simply suggest Jordan wouldn’t want him spreading fear.

Other General Hospital spoilers say Sasha Gilmore (Sofia Mattsson) will keep bonding with Michael Corinthos (Chad Duell). Of course, there may be a minor hiccup thanks to what Sasha said at GH. Sasha was pretty out of it when she wished Nina Reeves (Michelle Stafford) were her real mother. Michael overheard the odd comment and seemed confused, so he may mention it to Sasha in Tuesday’s episode.

Sasha will undoubtedly find a way to cover her blunder. Her bogus explanation will satisfy Michael, so he’ll smile and suggest her secret’s safe with him. That’ll keep Sasha and Valentin Cassadine’s (James Patrick Stuart) scheme going for now, but General Hospital is only delaying the inevitable. We all know Valentin and Sasha are going down eventually!

Over with Nina, she’ll be irritated with Willow Tait (Katelyn MacMullen) as usual. Elizabeth Baldwin (Rebecca Herbst) will get stuck in the conflict as Nina rants about a completely unacceptable situation. Elsewhere, Curtis and Laura will continue their Ryan Chamberlain (Jon Lindstrom) hunt. Ava Jerome (Maura West) and Dr. Kevin Collins (Jon Lindstrom) will keep doing their part back in Port Charles.

Unfortunately, Julian Jerome (William deVry) will interfere when he spots Kevin kissing Ava. He’ll insist that Kevin should get his hands off her, but he won’t realize their public display of affection is about luring Ryan out of hiding. Then again, Ava seems to be battling some real feelings, so their relationship could shift as this storyline progresses.