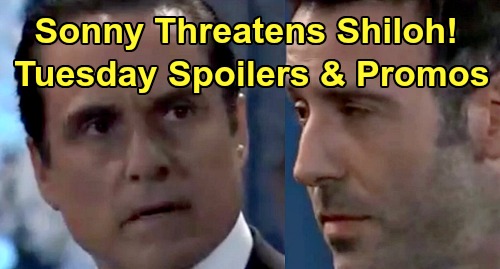 General Hospital (GH) spoilers for Tuesday, May 21, tease that Dr. Hamilton Finn (Michael Easton) will do something bold. Now’s his chance to pop the question, so he’s not going to let it pass him by. GH fans can expect Finn to take the stage, get down on one knee and ask Anna Devane (Finola Hughes) to marry him. It looks like Anna will accept his proposal, so she should make Finn a very happy man.

Meanwhile, Brad Cooper (Parry Shen) will find himself feeling nervous. It won’t take long for Lucas Jones (Ryan Carnes) to pick up on the weird vibe. He’ll push Brad to reveal what’s bothering him, but Brad obviously won’t want to come clean. There’s a good chance this ties in with Willow Tait (Katelyn MacMullen) and her presence at the Nurses Ball.

Willow believes “Wiley Cooper-Jones” is her biological son, so Brad’s worried about the threat she poses. If dominoes start falling, the whole truth could be exposed. Brad will do his best to keep everything quiet, but Lucas will indeed figure out part of the story later this week. The Wiley-Willow connection will become clear, so Brad will face backlash for keeping it quiet.

Other General Hospital spoilers say Kristina Corinthos-Davis (Lexi Ainsworth) will unleash her wrath. She thinks Sam McCall (Kelly Monaco) has fallen under Shiloh Archer’s (Coby Ryan McLaughlin) spell, so she’ll voice her concerns to Dr. Neil Byrne (Joe Flanigan) and Alexis Davis (Nancy Lee Grahn). Kristina will feel like they have to do something before Shiloh takes this any further.

Of course, Kristina doesn’t realize Sam’s scheming to take Shiloh down. Sam will stick to her goal and hope she can handle the obstacles ahead. Over with Nina Reeves (Michelle Stafford), she’ll have a heated confrontation with Willow. They’ll bicker as usual, but Willow will point out that she doesn’t have to take this anymore. She’ll probably think that’s the one good thing about getting fired!

Nearby, General Hospital spoilers say Sonny Corinthos (Maurice Benard) will deliver a fierce threat. He’ll warn Shiloh to stay away from his daughter. If Shiloh dares to go after Kristina again, you can bet Sonny will make him pay a steep price. Shiloh would definitely like to bring Kristina back to Dawn of Day, but he’s got his eye on a much bigger prize. It’s clear that Sam is Shiloh’s priority.

Over with Josslyn Jacks (Eden McCoy), she’ll get a special message from Oscar Nero Quartermaine (Garren Stitt). Cameron Webber (William Lipton) just showed up to pass it along, so Joss’ heart will be touched. After mulling it over, Josslyn will realize she wants to perform in Oscar’s memory, so that’s exactly what she’ll do.

Next, Lucy Coe (Lynn Herring) will feel like something fishy is going on. She’ll mention her suspicions to Felicia Scorpio (Kristina Wagner), so Felicia will be in a tight spot. Dr. Kevin Collins (Jon Lindstrom) and Ava Jerome’s (Maura West) plot is going well so far, so Felicia won’t want Lucy to blow it. She’ll try to make Lucy back off without revealing too much, but Lucy can be awfully persistent.

Finally, Ava will be stunned when Kevin considers bailing on the plan. She’ll insist that he can’t back out on her now – not when they’re so close to nailing Ryan Chamberlain (Jon Lindstrom). Ava will want Kevin to keep his head in the game and press on. She didn’t come this far to give up on bitter revenge!