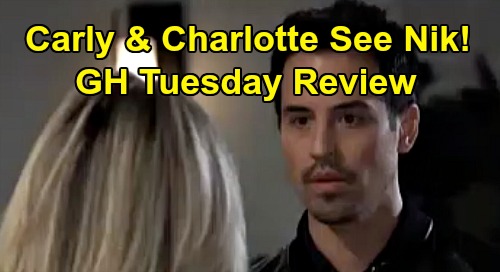 General Hospital (GH) spoilers review for Tuesday, November 12, reveal that Jasper “Jax” Jacks (Ingo Rademacher) was busy telling Nikolas Cassadine (Marcus Coloma) that he had the urge to call the authorities and tell them everything when Carly Corinthos (Laura Wright) showed up at his door. Carly demanded to know the real reason why Jax didn’t want Josslyn Jacks (Eden McCoy) to stay with him, and Jax revealed that he was in the middle of a volatile situation.

Carly continued to press the issue, when suddenly Nikolas walked in the room and made his presence known to her. Carly was incredulous as she heard Nikolas’ story of surviving Valentin Cassadine’s (James Patrick Stuart) murder attempt. And she got downright angry when Nikolas revealed that he didn’t want his family to know that he was alive. Carly insisted that Laura Collins (Genie Francis) needs to know that he’s alive and well.

But Nikolas refused, and Jax urged Carly to listen to Nikolas’ rationale for keeping his existence a secret. Nikolas then explained about the codicil, and how he needs to find it before he reveals himself…to keep his mother and his son safe from Valentin. Ultimately, Jax convinced Carly to keep Nikolas’ secret for now. Carly definitely wasn’t happy about it, though, and she may not be willing to keep the secret for long.

Meanwhile, Nina Reeves (Cynthia Watros) and Valentin got a visit at Wyndemere from Jason Morgan (Steve Burton), who was looking for information about Cassandra Pierce (Jessica Tuck). Valentin didn’t let on that he had been in contact with Cassandra, but Jason was suspicious, and he didn’t buy Valentin’s innocent act. Jason left Wyndemere looking like he was on a mission.

Valentin then spoke to Cassandra via phone and made some arrangements that GH viewers weren’t privy to, but afterwards Valentin told Nina that “it’s done.” At this point, Valentin broke down in Nina’s arms, clearly terrified for Charlotte Cassadine’s (Scarlett Fernandez) safety.

While all this was going on, Cassandra and Anna Devane (Finola Hughes) were in a standoff at the pier, with Cassandra holding Charlotte by the throat. Cassandra made Anna throw her gun and her phone into the harbor, while Anna tried to convince Cassandra to let Charlotte go. Cassandra wasn’t having any of it, and suddenly her “reinforcements,” which were two burly guys, showed up behind Anna.

Then Charlotte made her move and bit Cassandra’s hand. Charlotte ran off with one of the guys chasing her, while the other guy apprehended Anna. Charlotte ran into an alley and hid, with the guy close behind her. Jason then appeared on the scene and subdued the guy, tying his arms behind his back. Jason directed Charlotte to wait there, while he went down to the pier.

Once Jason got to the pier, Anna broke free from her guy and went after Cassandra while Jason fought the guy. Charlotte then showed up, which startled everyone, allowing Cassandra the break she needed to escape into the harbor. With Cassandra gone and swimming away, Charlotte used Jason’s phone to call Valentin and let him know that she was ok.

Cassandra then called Valentin from a small boat that she told Valentin was “exactly where you said it would be.” She told Valentin that she was prepared to tell him who freed her from WSB custody last year, but Valentin cut her off and said, “I just wanted to make sure you were where you should be. Goodbye, Cassandra.” Valentin then pushed a button on his phone and Cassandra’s boat exploded.

Jason, Anna, and Charlotte watched the explosion from the pier, then Charlotte noticed Nikolas standing off to the side in the shadows. But will Charlotte recognize Nikolas? And even if she does, would anyone believe her if she passed on that information? As of now, Valentin doesn’t know that Ava Jerome (Maura West) thought she saw Nikolas at the gallery. But if he were to find out what Ava saw, and his own daughter claims to have seen Nikolas, then Nikolas could be in some serious danger.