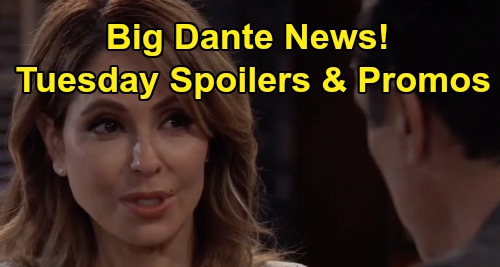 General Hospital (GH) spoilers for Tuesday, November 19, tease that some big moments are coming up. We should note that impeachment hearings coverage will continue, so it seems likely GH will be preempted. The show will make an official announcement later, but just keep the preemption possibility in mind and know that Tuesday’s episode could be pushed back. The same goes for other episodes this week.

Now let’s get to all the action. First, it looks like Kim Nero (Tamara Braun) will welcome Hayden Barnes (Rebecca Budig) to her new apartment. She’ll insist she hopes Hayden is as happy there as she was. Things could be a little awkward considering Kim’s in love with Elizabeth Baldwin’s (Rebecca Herbst) husband, but they should keep their conversation civil. Hayden is certainly on her sister’s side, but she can relate to wanting someone else’s man.

At GH, Liz will be shocked when “Drew Cain” aka Franco Baldwin (Roger Howarth) explains his choice. He’ll insist this life belongs to Franco and will assure Liz he intends to have the memory procedure. It’ll take Liz a minute to wrap her head around “Drew’s” change of heart, but she should be overjoyed by this unexpected development.

Brad will play the victim, but Lucas won’t let him get away with that. He’ll wonder why everybody’s after Brad, but he’ll have trouble getting real answers. Across town, Julian Jerome (William deVry) will receive some advice. If you’re curious about the woman who’s been pestering Julian at Charlie’s Pub, that’s Brook Lynn Ashton. Amanda Setton has taken over the role and will appear in more scenes on Tuesday.

Brook Lynn noticed Julian’s beef with Brad and pointed out that she’s a good listener. After Julian seemingly offers some vague details, Brook Lynn will ask why Julian would risk getting burned. She’ll urge him to get out while he still can, but it’s complicated since Julian doesn’t want to lose his son forever.

Meanwhile, Olivia will show up at Sonny Corinthos’ (Maurice Benard) place with a letter and suggest they should open it together. Will this involve bad news about Dante Falconeri (Dominic Zamprogna)? Olivia will get comfort from Ned Quartermaine (Wally Kurth) at some point this week, so she may receive a tough blow.

Fortunately, Brook Lynn will make her way over to the Quartermaine mansion sooner or later. Her visit should be a nice surprise for her father, Ned. Perhaps it can get Olivia’s mind off her troubles as well.

In court, General Hospital spoilers say Sam McCall (Kelly Monaco) will hear her verdict. Although Diane Miller (Carolyn Hennesy) presented a much stronger case, there’s one hurdle that could be difficult to get past. Jason Morgan (Steve Burton) just isn’t the kind of guy who seems defenseless. It may be hard for the judge to buy that Sam needed to shoot Shiloh in the back.

General Hospital spoilers say Sam will be distraught on Tuesday, so it makes sense that the judge will find her guilty. Thankfully, Jason and Damian Spinelli (Bradford Anderson) won’t give up! They’ll work on their plan to free Sam soon, so don’t miss what’s in store. We’ll give you updates as other GH news comes in. Stay tuned to the ABC soap and don’t forget to check CDL often for the latest General Hospital spoilers, updates and news.