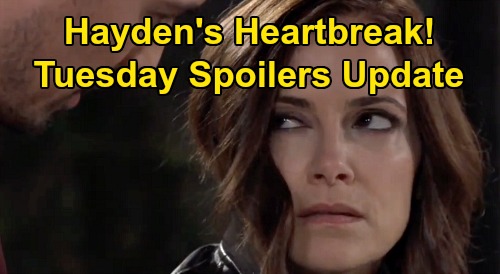 General Hospital (GH) spoilers update for Tuesday, November 26, teases that Jasper “Jax” Jacks (Ingo Rademacher) will be eager to wrap up the codicil hunt. He’ll want to find out what Ava Jerome (Maura West) knows about Helena Cassadine’s (Constance Towers) portrait and where she’s stashed it away. Laura Webber (Genie Francis) may warn Jax about pushing Ava too hard. She’ll undoubtedly be concerned about Ava’s stability since she seemingly had a mental break and checked into Shadybrook.

Of course, Jax knows more than Laura right now. He realizes Ava really did see Nikolas Cassadine (Marcus Coloma), but he’ll leave her out of the loop for the time being. As for Nikolas, he’ll have another crisis to contend with. Valentin Cassadine (James Patrick Stuart) will call up his lackey and insist they have to move on something. He’ll trust his henchman can get the job done ASAP.

After Hayden Barnes (Rebecca Budig) almost gets abducted, Nikolas will end up comforting her. He’ll be sorry for dragging Hayden into this mess, but he’ll offer her a way out. Nikolas won’t think it’s safe for Hayden to remain in Port Charles. He’ll remind her of what Valentin’s capable of and urge her to go into hiding.

Hayden will decide Nikolas is right, so she’ll get ready to make the heartbreaking choice to leave Violet Barnes (Jophielle Love) behind. She’ll know Hamilton Finn (Michael Easton) will take good care of Violet, but bailing on her little girl will still be one of the most painful things she’s ever had to do. While Hayden prepares for the next step, Neil Byrne (Joe Flanigan) will explain his theory to Alexis Davis (Nancy Lee Grahn). He’ll maintain that Alexis’ life coach is poisoning her, but she won’t be able to think of a reason why.

Alexis considers Kendra Lennon (Michelle Argyris) to be a great personal trainer and a friend. She won’t see why Kendra would try to harm her, but Neil will feel confident he’s correct. He’ll have a pill tested, which was given to Alexis by Kendra. Unfortunately, Neil will be left scratching his head when the pill comes up clean. It’ll be a perfectly safe gingko biloba supplement, so Neil won’t understand his mistake.

GH fans know Kendra actually poisoned the powdered drink mix, but Neil won’t put that together just yet. However, Alexis will remain on edge after Neil’s initial hunch. She’ll realize she needs to figure out if she has a deeper connection to Kendra – one that she doesn’t even know about. Since Kendra is trying to avenge Kiefer Bauer’s (Christian Alexander) death, Alexis will uncover some shockers soon enough.

Other General Hospital spoilers say Cameron Webber (William Lipton) and Trina Robinson (Sydney Mikayla) will demand the truth. They just got Dev Cerci (Ashton Arbab) all flustered and mixed up on the details of his “Dev Corbin” story. After the pressure becomes too much to bear, it looks like Dev will confess he’s not Sonny Corinthos’ (Maurice Benard) cousin.

That’ll lead to another interrogation about who Dev really is. Dev certainly won’t want Trina and Cam spilling anything that could lead to his deportation. His life could be in jeopardy if he gets sent back to Turkey. Josslyn Jacks (Eden McCoy) may eventually come to Dev’s rescue and explain things to the others. She can hopefully convince Trina and Cameron to see things from Dev’s perspective.

Finally, Lulu Spencer (Emme Rylan) will catch up with Dustin Phillips (Mark Lawson). They’ll chat about Thanksgiving and what their plans are. Lulu will end up at the Quartermaine mansion – at least for a while. Will Dustin join Lulu there or perhaps meet her and the kids afterward? Either way, let’s hope Dustin and Lulu can squeeze in some holiday time together.