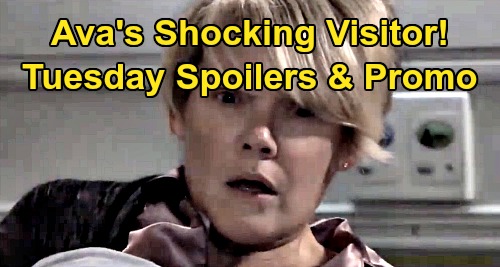 General Hospital (GH) spoilers for Tuesday, November 5, tease that Julian Jerome (William deVry) will stand his ground with Brad Cooper (Parry Shen). He wants Brad to end his marriage to Lucas Jones (Ryan Carnes) and leave Port Charles, but Brad will continue to put up a fight. Julian will gleefully suggest it’ll be like Brad never existed. He won’t think Lucas is going to wallow in his sorrow for long.

Brad will argue that Julian’s making a mistake, but Julian won’t budge on this. He’ll leave Brad with no choice but to take drastic action. General Hospital spoilers say Brad will go to Lucas and reveal that Julian’s blackmailing him. That’ll lead to more questions, but Brad will hope he can handle them and hopefully keep the upper hand.

In Tuesday’s preview video, a smiling Lucas tells someone “what doesn’t kill us makes us stronger.” It’s doubtful that’ll be Brad since things are so tense. Instead, Lucas will likely talk to someone else before Brad makes his confession. It looks like he’ll get a pep talk and offer reassurance in return.

Meanwhile, Carly Corinthos (Laura Wright) will deliver Josslyn Jacks’ (Eden McCoy) punishment. GH fans know Joss got caught drinking at the Halloween dance, so she’ll have to pay the price. Carly will point out that Josslyn made some poor choices and there will be consequences. Joss will have to take responsibility for her drunken night and hope for the best.

Across town, “Drew Cain” aka Franco Baldwin (Roger Howarth) will stop by Elizabeth Baldwin’s (Rebecca Herbst) place. Liz told “Drew” that he should at least come say goodbye to the family before he leaves. If “Drew” can bid them a proper farewell, Liz is willing to let him go.

Cameron Webber (William Lipton) will assume that’s what’s happening in Tuesday’s episode. He’ll urge “Drew” to confirm that he’s leaving Port Charles, but “Drew” may have other news to pass along. During his recent argument with Kim Nero (Tamara Braun), “Drew” suggested they should stay in town and let Kim work on her issues.

Kim’s been struggling ever since Oscar Nero Quartermaine (Garren Stitt) died, but she’ll take a step toward healing on Tuesday. General Hospital spoilers say Kim will admit she needs help, but what about her relationship? She’ll be searching for closure, which doesn’t make it sound like “Drew” and Kim have a future.

However, Kim will get comfort from Monica Quartermaine (Leslie Charleson) next week, so she won’t be heading for Manhattan or anywhere else just yet. In the meantime, Nikolas Cassadine (Marcus Coloma) will focus on his mission. He’s on the same page with Jasper “Jax” Jacks (Ingo Rademacher) and Hayden Barnes (Rebecca Budig) now, so he’ll restate his intentions. Nikolas will make it clear that he’s back to take what was stolen from him.

At Shadybrook, Ava Jerome (Maura West) will wake up startled. She’ll hear a noise in bed and promptly freak out! It sounds like a surprise visitor’s about to shake things up, so don’t miss what’s in store. We’ll give you updates as other GH details emerge. Stay tuned to the ABC soap and don’t forget to check CDL often for the latest General Hospital spoilers, updates and news.