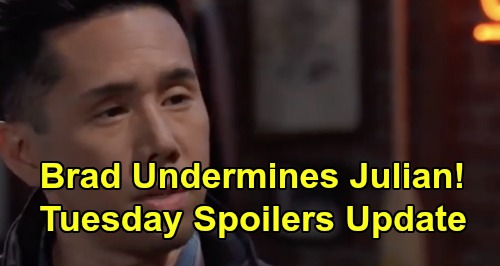 General Hospital (GH) spoilers update for Tuesday, November 5, teases that Josslyn Jacks (Eden McCoy) will have to face the music – well, more music! She already got a lecture and some guidance after her drinking debacle on The Haunted Star. However, it’s time for Josslyn to accept her true punishment. Between her parents and the principal, Joss may have a steep price to pay.

Over with Cameron Webber (William Lipton), he’ll turn his attention to some different drama. “Drew Cain” aka Franco Baldwin (Roger Howarth) will stop by Elizabeth Baldwin’s (Rebecca Herbst) place, so Cameron will guess “Drew’s” there to say goodbye. He’s expecting “Drew” to leave Port Charles since that was his previous plan with Kim Nero (Tamara Braun), so he may blast him for it.

However, Cameron isn’t privy to “Drew’s” recent fight with Kim. He now understands she’s got some deep issues to work through. “Drew” suggested they should stay in Port Charles and let Kim sort things out, but she ultimately stormed out. Kim feels like “Drew” only wants her after she’s “fixed,” so that’s left their relationship a bit up in the air. It’s left “Drew’s” future outside of PC up in the air, too.

“Drew” may tell Liz and Cameron that he intends on sticking around for now. Of course, that doesn’t mean “Drew” and Kim’s romance will work out. Kim will talk about needing help on Tuesday, so it’s good that she’s finally reached a place of understanding. She’ll be looking for closure, which could mean she’ll come to grips with “Drew” being part of her part.

Even so, Kim will remain in town at least a little while longer. She’ll be grateful for Monica Quartermaine’s (Leslie Charleson) kindness during the week of November 11-15. In the meantime, Lucas Jones (Ryan Carnes) will try to have an optimistic attitude. His relationship with Brad Cooper (Parry Shen) is falling apart, but he’ll sport a slight smile and tell someone what doesn’t kill us makes us stronger.

Lucas won’t know if there’s hope for his marriage, but he’ll want to remain a good dad to “Wiley.” As for Brad, General Hospital spoilers say he’ll be determined to fix this. Brad will pay Julian another visit and argue that this he’s making a mistake. He’ll push Julian to drop his blackmail plot and let him get his family back on track.

Julian will insist that Lucas and “Wiley Cooper-Jones” (Theo and Erik Olson) are going to be just fine without Brad. He’ll think it’ll be like Brad never existed, but Brad will turn the tables instead. GH fans can expect Brad to expose Julian’s setup and threats. This is a risky strategy since it’ll spark questions that could lead to the truth about “Wiley.” Nevertheless, Brad just won’t think he has any other options left.

At Shadybrook, Ava Jerome (Maura West) will awaken to a startling noise. She’ll jolt up in bed as she tries to figure out what – or who – caused it. Ava won’t be pleased to hear things going bump in the night! She’s in for another shock when she welcomes a visitor.

There’s no confirmation on who that visitor might be, but Jasper “Jax” Jacks (Ingo Rademacher) will pop in at some point this week. Until then, Jax will have another tense discussion with Nikolas Cassadine (Marcus Coloma). He wasn’t thrilled about Nikolas’ sudden return, but he’s willing to stick to the goal for the time being.

Nikolas will reiterate that he’s going to take back what was stolen from him. He’ll be fired up, so he’ll need Jax to rein him in and handle any disasters along the way. General Hospital spoilers say this storyline will come with some exciting twists and turns, so there’s much more to come. We’ll give you updates as other GH news emerges. Stay tuned to the ABC soap and don’t forget to check CDL often for the latest General Hospital spoilers, updates and news.