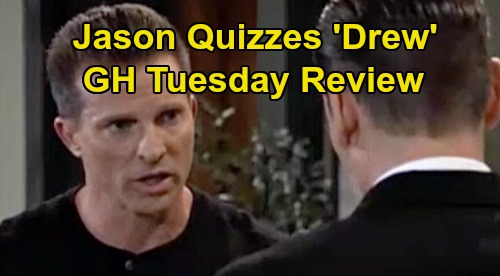 General Hospital (GH) spoilers review for Tuesday, October 22, reveal that Hamilton Finn (Michael Easton) planned to meet with Hayden Barnes (Rebecca Budig) at The Metro Court for breakfast. He clearly wanted to confront Hayden about the possibility that she was keeping a child hidden from him – something that would be a difficult conversation to have, but he seemed determined to broach the subject and get things out in the open.

However, Hayden was running late, which left Finn as a sitting duck for Robert Scorpio (Tristan Rogers), who came along to needle him about his “relationship” with Hayden. Robert was feeling protective of Anna Devane (Finola Hughes) and noted that it seemed that Finn was lying about something having to do with Hayden. The two had a contentious talk, and still Hayden didn’t show.

As she was about to go meet Finn, Hayden received an alarming phone call, while Finn received a call of his own to treat a new patient. He headed to the hospital, where Hayden intercepted him. She worriedly informed him that the patient he was going to see was her daughter. Of course, it won’t be long before Finn finds out that she’s his daughter, too.

Meanwhile, Elizabeth Baldwin (Rebecca Herbst) and Scott Baldwin (Kin Shriner) met at Kelly’s in advance of Franco Baldwin’s (Roger Howarth) competency hearing. Elizabeth felt like there was something they had missed that could help them in their case, and Scott did his best to reassure her. Martin Gray (Michael E. Knight) came along and introduced himself to Elizabeth, who gave him the cold shoulder.

Later, Julian Jerome (William deVry) arrived at Kelly’s and noticed that Elizabeth was getting ready for the hearing. Elizabeth mentioned that she went to see Kim Nero (Tamara Braun) the other night and that she’d be testifying that Franco is now “Drew Cain.” Julian wasn’t surprised by this news, and he let Elizabeth and Franco know that they had his blessing to do whatever they needed to do.

Julian walked away, then turned back and said that since they were talking about Kim, the there was something he needed to tell them about her. GH viewers didn’t see exactly what Julian told them, but chances are he relayed the story about how Kim drugged and tried to have her way with Drew Cain (Billy Miller) on The Haunted Star. Later, Scott said that Julian might have just handed them a total win.

Of course, if Julian told them about Kim’s drugging of Drew, then Scott will likely ambush Kim with the information when she’s on the stand. It would certainly stand to make Kim appear as someone who is motivated by her grief over losing her son and who is trying to hold on to any part of Oscar Nero Quartermaine (Garren Stitt) and Drew that she can. Scott could argue that Kim’s grief is spearheading Franco’s whole case.

Finally, Franco and Martin got prepared for the trial at Shadybrook. Martin brought Franco a military suit with Drew’s medals attached. Franco tried on the suit and felt right at home. Martin instructed Franco to keep asking himself “who is Drew Cain,” since he’s got to be able to convince the judge that he’s Drew.

Later, Jason Morgan (Steve Burton) showed up at Shadybrook to see Franco, hoping that he might remember something about Peter August (Wes Ramsey). He showed Franco a photo of Peter and asked if he recognized him. Franco said that Peter had bought him a beer at The Floating Rib, and that he had a “feeling” like deja vu when he saw Peter. Franco said that he felt like he should remember the guy, but he didn’t.

Later, Martin returned to see Franco and caught the tail end of Jason’s visit with him. Martin wondered what was going on, and Franco explained that Jason had questions for him as “Drew.” Martin found that very interesting and will likely be something that he’ll bring up during the hearing as further evidence that Franco is now indeed Drew.