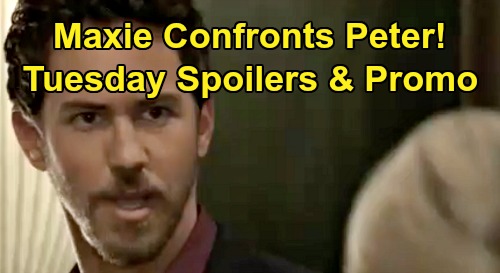 General Hospital (GH) spoilers for Tuesday, October 29, tease that Maxie Jones (Kirsten Storms) will have some concerns. Peter August’s (Wes Ramsey) obsession with Franco Baldwin’s (Roger Howarth) case may bring more suspicions. Maxie will demand to know what’s going on, but Peter will creepily declare that everything turned out for the best. He’ll also spring an idea on Maxie, which could either help or raise more red flags.

Over with Julian Jerome (William deVry), he’ll have an intriguing encounter with Kendra Lennon (Michelle Argyris). Julian’s a pretty intuitive guy, so he may sense there’s something off about this chick. If so, he’ll be right! GH fans know Kendra’s got a deadly plot in motion, so it’s good that Julian’s being brought into this. Let’s hope he can come to Alexis Davis’ (Nancy Lee Grahn) rescue down the road.

In the meantime, General Hospital spoilers say Jason Morgan (Steve Burton) will share his fears with Alexis. Diane Miller (Carolyn Hennesy) suggested a bench trial, which would speed things along and might score Sam McCall (Kelly Monaco) a more objective ruling. However, Jason remain wary. He’ll tell Alexis he’s not comfortable putting Sam’s future in the hands of one person.

Of course, Alexis knows Diane quite well and trusts her judgment. She may contend that if Diane feels this is the way to go, then Sam should listen to her lawyer. Whatever the case, General Hospital spoilers say Sam will ultimately stick with the bench trial option.

Next, Cameron Webber (William Lipton) will battle guilt. He’ll feel responsible for Elizabeth Baldwin’s (Rebecca Herbst) pain, but Liz will insist none of this is Cam’s fault. It’s not Franco Baldwin’s (Roger Howarth) fault either since he saved Cameron by taking his place. Liz will give Cameron a pep talk, but she could really use one herself. It looks like Bobbie Spencer (Jacklyn Zeman) might provide it since she’ll offer her sympathy on Tuesday.

Then again, Bobbie could support Scott Baldwin (Kin Shriner) instead. Scott will be busy collecting a favor first though! He just showed up to see Sonny Corinthos (Maurice Benard), so they’ll work on a plan to stop Franco from leaving. Scott will be willing to try anything if it buys them some time and can get Franco back to his old self.

Across town, “Drew Cain” will break Kim Nero’s (Tamara Braun) heart. Thanks to the Drew drugging details that came out, “Drew” just won’t be sure this relationship can work. Kim’s reaction won’t do much to ease “Drew’s” mind. She’ll be a mess as she shouts, “You are what is best for me!”

“Drew” will disagree and argue that Kim should focus on healing right now. Instead, Kim will march over to Charlie’s Pub and slap Julian Jerome (William deVry) in the face! She’ll be furious with Julian for spilling her secret and pushing “Drew” away as a result.