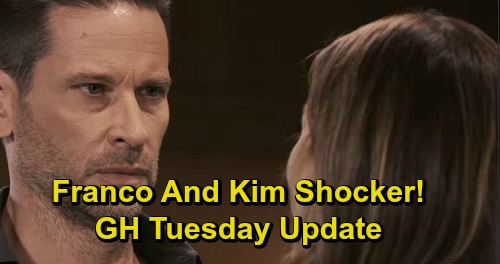 General Hospital (GH) spoilers update for Tuesday, September 17, tease that Kim Nero (Tamara Braun) won’t be able to resist Franco Baldwin (Roger Howarth). She may draw back after that kiss they shared, but it won’t stop their inevitable hookup. The pull of Drew Cain’s (Billy Miller) memories is just too strong, so Kim will ultimately surrender.

Over with Elizabeth Baldwin (Rebecca Herbst), she’ll run into Harrison Chase (Josh Swickard). He’ll think there’s something Liz should know, so he’ll probably mean the status of Franco’s ankle monitor. Chase just removed it, which should send Liz into a panic. She won’t want Franco to vanish without a trace.

GH spoilers say Chase will provide updates on Franco’s location. He’ll admit he left Franco at Kim’s place, so Liz will dash to the apartment ASAP. She just might witness the horrifying sight of Franco and Kim sleeping together! Liz will be right outside the door as things get steamy, so we’ll see how it goes.

Meanwhile, Brad Cooper (Parry Shen) will seek reassurance. He’ll want Julian Jerome (William deVry) to confirm that Liesl Obrecht (Kathleen Gati) won’t be a problem anymore. Julian won’t seem convinced of that, so maybe his car tampering didn’t pan out. It looked like Julian rigged a disaster for Liesl, but looks can be deceiving. Perhaps Julian didn’t go through with his sneaky plan.

Regardless, Liesl will survive Tuesday’s episode and continue to be a pest. She’ll love every minute of Valentin Cassadine’s (James Patrick Stuart) latest dilemma. Liesl doesn’t want Nina Reeves (Cynthia Watros) to get her heart broken, but she may not see any real danger of that. She might feel confident that Sasha Gilmore (Sofia Mattsson) will stay tight-lipped when it comes to Nina.

Of course, General Hospital fans know Sasha confessed to Michael Corinthos (Chad Duell), but Liesl may not see him as a threat either. She’ll probably assume everyone will focus on protecting Nina in the end. Whatever the case, Liesl will take time to taunt Valentin a bit more. She’ll enjoy watching him squirm, especially after Sasha flexes her power.

Sasha will refuse to let Valentin dictate her life and decisions. She’ll yell that he should mind his business and stay out of hers, but that’ll be tough since they’re involved in the same scheme. Nina will sashay in the room and pick up on the strange vibe. She’ll question Sasha and Valentin, so they’ll have to cover their blunder. Nina won’t be learning the truth just yet.

Other General Hospital spoilers say Michael will need some comfort. Thankfully, he’ll get some from Willow Tait (Katelyn MacMullen). Michael may be pretty hard on himself since he consistently falls for women who deceive him. However, his trusting nature is also one of his best qualities. Michael has faith in people, and that’s not always a bad thing.

Meanwhile, Andre Maddox (Anthony Montgomery) will get a visit from Hamilton Finn (Michael Easton). They’ll discuss Franco’s memory reversal and whether it has a chance of working. Andre already gave Liz the rundown, but it should be Finn’s turn on Tuesday. The docs should discuss the four possible outcomes and the danger Franco would be facing.

Franco could become Franco again or his Drew memories could grow stronger and sharper. There’s also a possibility there’ll be no change at all. Naturally, the worst outcome would be Franco ending up in a vegetative state. That’s definitely not what Liz wants, but she’s desperate for Franco’s return. It sounds like Liz will have to risk all if she wants to get the “Friz” family back on track.

Finally, chaos will break out on The Haunted Star. Armed Cassandra Pierce (Jessica Tuck) will emerge from a closet, so Curtis Ashford (Donnell Turner) and Laura Webber (Genie Francis) will have to keep their cool. They’ll try to become Cassandra’s allies, so Curtis will push her to divulge what she knows. He’ll argue that they can all take Valentin down together, but Cassandra just won’t trust them.

Cassandra will be prepared to shoot, but Laura and Curtis will snatch the gun away. They’ll turn it on Cassandra and leave her begging to join forces after all. Nevertheless, Curtis and Laura will insist on hauling Cassandra to the PCPD instead. She’ll be in a tight spot, but Cassandra is one crafty character. If anyone can wiggle her way out of trouble, it’s Cassandra!