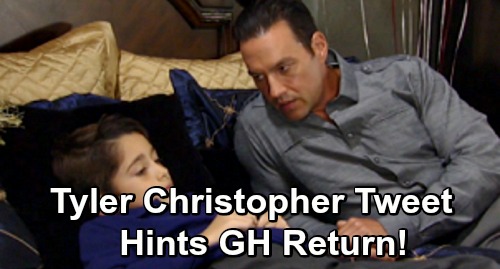 General Hospital spoilers (GH) tease that Tyler Christopher, formerly Stefan O. DiMera of Days of Our Lives and Nikolas Cassadine of General Hospital, may be on his way back to GH as Nikolas. General Hospital buzz had been swirling since the announcement that Tyler took a leave from Days and former GH castmate Brandon Barash (GH’s Johnny Zacchara) took his place permanently.

Tyler may have hinted at a confirmation that he was gone from Days permanently and that he is headed back to GH in a tweet responding to Nicholas Bechtel (Spencer Cassadine) recently.

Many General Hospital  fans had tweeted Tyler saying that while they would miss him on Days of Our Lives, they’d love him to reprise the role of Nikolas Cassadine on General Hospita. Amongst back and forth tweets of Nicholas being glad Ohio won the Rose Bowl (they must both be Ohio football fans) Nicholas agreed with a GH fan that he misses Tyler and that he should come back to GH as his TV dad! 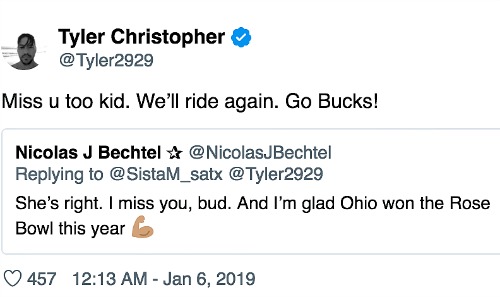 Tyler replied, “Miss u too kid. We’ll ride again! Go Bucks!” Given the context of the rest of the tweet, with many fans tweeting they would miss Tyler on Days but wanted him to come back to GH – including one fan who started a petition and posted the site to bring Tyler back to GH – and many wanting Tyler and Nicholas to be father and son Cassadines again, including Nicholas Bechtel himself and apparently Tyler, this seems to be a strong hint that Tyler’s on his way back.

Of course, Tyler’s tweet “we’ll ride again” back to Nicholas could be confirming something else outside of General Hospital but the context seems to confirm it’s about reprising the role of Nikolas Cassadine.

When you take into consideration other General Hospital spoilers reported by CDL teasing that a Soap Opera Digest blind item talks about an Emmy-award winning actor contacting his former show about returning. Tyler’s leaving Days has been confirmed, but fans will have to wait to see his GH return confirmed.

There’s certainly a strong possibility that the mysterious Cassadine hand on Cassandra Pierce (Jessica Tuck) might be Nikolas’s. Keep watching GH and checking CDL for General Hospital spoilers frequently to see what happens regarding Nik’s return?