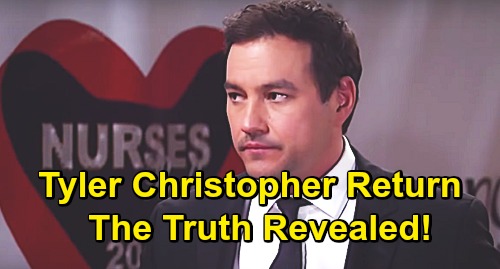 General Hospital (GH) spoilers tease that we could be seeing Nikolas Cassadine (last played by Nick Stabile) return to the show. There’s certainly been a lot of talk lately about Nikolas by various characters on GH, and that’s led to a flurry of fan talk about whether TPTB have an overarching plan to bring Nikolas back from the dead.

As GH viewers know, Ava Jerome (Maura West) recently tried to “contact” Nikolas from beyond the grave with the help of psychic Sibley Gamble (Veronica Cartwright). However, Sibley wasn’t able to connect with Nikolas’ vibes, which to many fans signified what they have long suspected…that Nikolas didn’t really die at the hands of Valentin Cassadine (James Patrick Stuart).

And of course, Hayden Barnes (Rebecca Budig) is back on canvas, and it seems that she and Jasper “Jax” Jacks (Ingo Rademacher) have a secret plan in place that might have something to do with Nikolas. As a result, there’s been a lot of fan clamoring as of late for TPTB to bring back Nikolas, and there’s definitely a contingent of fans who want Tyler Christopher to reprise the role.

General Hospital Could Recast The Role Of Nikolas Cassadine

Of course, there’s always the possibility that the role could be recast if indeed Nikolas will be returning to canvas, and as CDL recently reported, a Soap Opera Digest blind item suggests that a Nikolas Cassadine recast could indeed be in the works. But that hasn’t stopped fans from making their desire known for Tyler to reprise the role.

All one has to do is follow the GH fan accounts on Twitter to see that what A LOT of fans want is for Tyler to come back as Nikolas. And Tyler himself has noticed. In fact, he recently addressed all the fan love on his own Twitter feed.

Tyler wrote: “You are all very sweet to be so loyal as you always are. I know they are talking about Nikolas as of late. I’ve always said I would never close that door from my side. I just want to thank you for always rooting for me and the character. I grew up with him as many of u have.”

Fans Thrilled Tyler Christopher Is Open To Returning To The Role

Well, that tweet has garnered a great deal of fan response, as you might imagine. One of Tyler’s followers replied by saying, “Yes, we do miss you and I believe that one day you will return home.” And anther commented: “Come home! And bring Nicolas [Bechtel] with you! No more boarding school. Take back your castle. Unseat the fraud.”

Of course, the latter fan is referring to the fact that Nikolas’ son, Spencer Cassadine (Nicolas Bechtel), recurs on the show and is off in boarding school in Europe. Fans would love to see Spencer – who is growing up fast – get his father back and reclaim his home at Wyndemere.

So, for now it does’t sound like there’s a plan in place for TPTB to bring back Tyler in the role of Nikolas, but you never know what could happen down the line. The good news is that it seems that Tyler is open to the possibility of returning – and that’s great for fans to know!

Do you want to see Tyler return as Nikolas Cassadine? And do you think that all of this Nikolas talk on GH means the dream may come true? Stay tuned to the ABC soap and don’t forget to check CDL often for the latest General Hospital spoilers, updates, and news.

You are all very sweet to be so loyaI as you always are. I know they are talking about Nikolas as of late. I’ve always said I would never close that door from my side. I just want to thank you all for always rooting for me and the character. I grew up with him as many of u have.