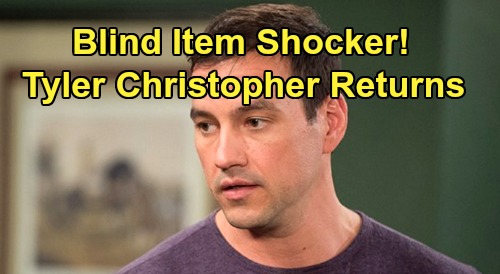 General Hospital (GH) spoilers reveal that a recent blind item could point to some great news. GH fans can tell that a Nikolas Cassadine (last played by Nick Stabile) comeback is in the works. The writing’s on the wall, but who will play Nikolas? Some new info suggests it could be someone we already know and love.

“Chances are a familiar face will soon be reprising a fan-favorite role,” a Soap Opera Digest blind item revealed. Of course, there’s no guarantee that’s about Nikolas or GH, but there are some good reasons why it might be. Let’s consider a few of those reasons.

First, we should consider what the other soaps have cooking. Blind items could be about any of the four daytime dramas, but maybe we can narrow it down. Days of Our Lives has comebacks cooking all the time.

They can’t keep much quiet due to their advance filming schedule – and they honestly don’t seem to like keeping returns quiet anyway. If there’s even a whiff of something, it’s usually out there.

Blind Item Could Refer To Any Soap But Most Likely GH

The Young and the Restless supposedly has a Mishael Morgan (ex-Hilary Hamilton) comeback brewing, but word has it she may be playing a new character. That doesn’t fit with the fan-favorite role thing unless plans have changed.

As for The Bold and the Beautiful, they tend to stick with what works for the most part. This blind item could point to a return for B&B, but there aren’t really any signs of it anywhere.

New Bold and the Beautiful spoilers point to a new chapter for Maya Avant (Karla Mosley) along with Rick Forrester (Jacob Young). Since that’s been spoiled, neither option really works for this blind item.

The term “fan favorite” should be reserved for the most popular of soap stars anyway. It needs to be someone fans really go nuts over – and fans go nuts for Tyler Christopher as Nikolas. He’s the perfect Nik and happens to be available. It makes sense for General Hospital to let Christopher step back in the role instead of rolling the dice with a recast.

That’s especially true since Billy Miller just left as Drew Cain. This is GH’s chance to bring in another popular actor to fill the void. Since this Nikolas return is almost certainly happening, Christopher’s comeback would be ideal. General Hospital spoilers say more clues will point to Nikolas in danger soon, so don’t miss all the action.

Would you like to see Tyler Christopher back as Nikolas Cassadine? We’ll give you updates as other GH news comes in. Stay tuned to the ABC soap and don’t forget to check CDL often for the latest General Hospital spoilers, updates and news.