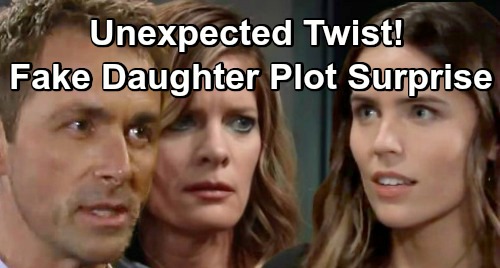 General Hospital (GH) spoilers tease that there could be a twist in the fake daughter storyline. GH fans know Valentin Cassadine (James Patrick Stuart) cooked up a scheme to win Nina Reeves (Michelle Stafford) back. Sasha Gilmore (Sofia Mattsson) was recruited to play the part of Nina’s daughter, which she now regrets agreeing to.

Even so, Sasha has enjoyed getting to know Nina. She would miss her pretend mom if Nina weren’t in her life. Sasha’s battled guilt for quite a while now, but we’re inching closer to the truth coming out. On May 29, General Hospital spoilers state that a mother-daughter lunch will bring Sasha and Nina closer. Then, Nina will face a rude awakening on May 30.

Here’s where things get interesting. Summer preview info points to a major obstacle for Nina. The phony daughter revelation could certainly be that obstacle. However, General Hospital spoilers say this obstacle could put Nina’s wedding plans on hold. Wait…on hold? You’d think those wedding plans would be completely destroyed if Nina found out Valentin lied about something so huge.

That seemingly leaves us with a couple options. First, it’s possible Nina will find out something else that causes this rude awakening. Learning the circumstances behind Willow Tait’s (Katelyn MacMullen) pregnancy might qualify.

Even seeing the half-heart pendant on Willow is an option, but that would honestly be weird thing for Willow to be wearing. She’s always tried to distance herself from her past and wouldn’t know the jewelry’s significance. The necklace seems more like something that would be discovered in a box that’s tucked away.

Regardless, General Hospital spoilers say Nina will push for more time during the week of June 3-7. That suggests whatever she learns on May 30 will set up the marriage postponement. Willow’s drama wouldn’t affect Nina’s wedding unless it relates to the fact that she’s probably the bio daughter.

Perhaps we can rule out the rude awakening being about Willow, so let’s bring this back to Sasha and Valentin. We have to remember that Valentin’s hands look clean. He tasked Curtis Ashford (Donnell Turner) with handling the initial DNA tests, and Nina trusts Curtis with all her heart.

Nina also believes Peter August (Wes Ramsey) and Maxie Jones’ (Kristen Storms) DNA test was run without Valentin’s knowledge. She doesn’t suspect Valentin of tampering because it looks like he was in the dark. Now think about Sasha’s perspective. The last thing she wants to do is hurt Nina, but she also wants to get rid of this crushing guilt.

Nina looked so blissful and in love as she watched Valentin perform at the Nurses Ball. Even Sasha was sporting a huge grin. She can see how happy they are together and understands that Valentin didn’t set out to hurt Nina with this plot. Could Sasha take one for the team? Will she confess and find some way to spin this?

In Sasha’s mind, she’d be protecting Nina from a double blow – and avoiding the wrath of the very powerful Valentin Cassadine! It’s certainly an option to consider since Nina apparently won’t end her marriage plans on the spot.

Still, dealing with the devastation could be enough to require a postponement. Sasha might pour her heart out and beg to be a stand-in daughter anyway, so Nina may have a lot to think about. We’ll give you updates as other GH news comes in. Stay tuned to the ABC soap and don’t forget to check CDL often for the latest General Hospital spoilers, updates and news.