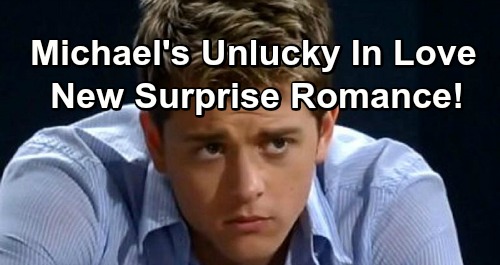 General Hospital (GH) spoilers reveal that Michael Corinthos (Chad Duell) is long overdue for a successful romance. He’s been nothing if not unlucky in love. Michael even had his son taken from him and given to another couple to raise. Is Michael destined to spend his life alone or can GH finally turn things around?

Michael’s best relationship to date was with Abby Haver (Andrea Bogart), a stripper who fell madly in love with him after his prison stint. General Hospital fans will recall that Michael was locked up for killing his stepmother, Claudia Corinthos (Sarah Brown). After his release, Michael fell for Abby and tried to protect her by sending her out of town when someone was attacking dancers on the street.

Sadly, Abby was crushed and killed when a malfunctioning crane dropped a load of lumber on her at a construction site. Some viewers also loved Michael with Sabrina Santiago (Teresa Castillo), at least until she lied that Michael was the father of her son. Sabrina was murdered at the hospital by Paul Hornsby (Richard Burgi), which naturally brought her courtship with Michael to a tragic end.

Michael also had a short-lived relationship with Starr Manning (Kristen Alderson) after her boyfriend and daughter’s unfortunate deaths. However, Starr chose to leave Port Charles instead of staying with Michael. Yes, Starr had suffered greatly after coming to PC, but she and Michael were a good pairing.

Kiki Jerome (Hayley Erin) and Michael made a cute couple, but they didn’t work out either. The possibility of a romance with Francesca (Celesta DeAstis) ended because of Nelle Benson (Chloe Lanier). Michael even tried online dating, which was a total bust. Michael may be stuck with the single life permanently unless he can get his romantic act together.

General Hospital fans know Maxie Jones (Kirsten Storms) became a widow over a year ago, so she’ll inevitably start dating again soon. A Maxie and Michael pairing would have some potential. Michael also has a nice bond with Maxie’s son, especially since he believes his baby is dead.

Once Michael realizes Jonah Corinthos is still alive, he’ll need a mother figure for him. Nelle certainly isn’t going to be a positive influence on the kid. Maxie has two children of her own, so Michael and Jonah could join them to make a sweet blended family.

Willow Tait (Katelyn MacMullen) and Michael have chemistry as well, so there’s another possibility to consider. General Hospital spoilers say their bond will continue to develop. Willow believes her child is with a loving family and has no idea he’s dead. She’ll be devastated when she learns the real Wiley Cooper-Jones died shortly after his adoption, but there’s still a way for Willow to get a happy ending.

Perhaps Willow could serve as Jonah’s mom down the road. Willow won’t have her biological son, but she could help raise another child that’s come to matter to her. Michael definitely seems drawn to Willow, so these two would make a fantastic duo.

Michael just needs to find a soul mate to share his life with. Maxie and Willow present some excellent options, so hopefully GH will push him together with one of them eventually. Do you think Michael can break his unlucky in love streak? We’ll give you updates as other news comes in. Stay tuned to the ABC soap and don’t forget to check CDL often for the latest General Hospital spoilers, updates and news.