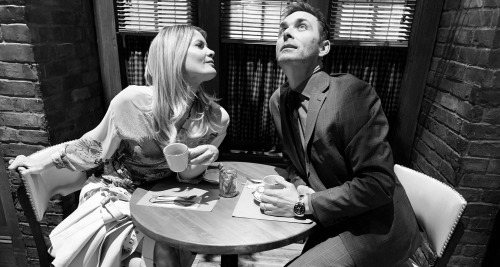 General Hospital (GH) spoilers tease that Valentin Cassadine (James Patrick Stuart) will be up to his old tricks again. He’s got Nina Reeves (Michelle Stafford) fooled into thinking that Sasha Gilmore (Sofia Mattsson) is her daughter, and he did it by altering the results of two DNA tests. But now Maxie West (Kirsten Storms) is determined to do a secret DNA test to find out if Valentin has been playing Nina.

Last week at Charlie’s Pub, Maxie boldly plucked a hair from Sasha’s head under the guise that it was a grey hair that needed to be eradicated. But Maxie secretly kept the hair and plans on using it for an upcoming DNA test that she’ll arrange with Peter August (Wes Ramsey).

Maxie’s hair-plucking move definitely aroused suspicion for Sasha, and it also caught the attention of Valentin, who happened to be sitting nearby. It’s unclear if Valentin actually saw Maxie pluck the hair, but the look on his face indicated that he had his suspicions.

It looks like Valentin and Sasha will compare notes later, and Sasha will likely let Valentin know that Maxie stole one of her hairs. That will get Valentin in a panic, and he’ll have to act quickly to keep the ruse going that Sasha is Nina’s daughter.

Of course, for someone like Valentin it isn’t that difficult to alter DNA test results, but he’ll have to do a bit of snooping to find out where Maxie and Peter are planning to get the test done. He’ll probably bribe someone on staff to alter the results, in typical Valentin fashion.

GH spoilers say that Maxie will get a pleasant surprise, so it looks like the test results will come back indicating that Sasha is indeed Nina’s daughter. Valentin will probably think that’s the end of it, but will it be? We can’t forget that Maxie has Peter on her side, and Peter may be suspecting Valentin to tamper with the results.

It would be a fun twist if Peter were to somehow trail Valentin and find out that he rigged the result. Time will tell whether that will happen, but at some point the truth is going to come out that Sasha is not really Nina’s daughter. Do you think that Peter will be the one to expose Valentin? Stay tuned to the ABC soap and don’t forget to check CDL often for the latest General Hospital spoilers, updates, and news.