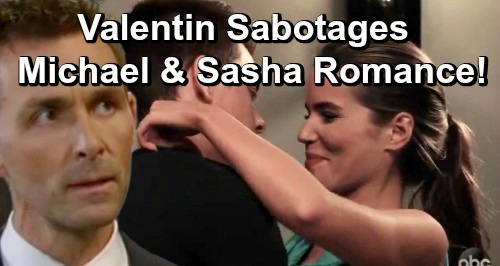 General Hospital (GH) spoilers tease that Sasha Gilmore (Sofia Mattsson) will go against her instincts. She knows she needs to keep Michael Corinthos (Chad Duell) at a distance for several reasons. One is that Sasha’s lying about being Nina Reeves’ (Michelle Stafford) daughter. Another is that she intends to leave Port Charles after her fake mom’s upcoming wedding.

However, Valentin Cassadine (James Patrick Stuart) just might be the most dangerous reason of all. Sasha has to know Valentin is a powerful man. She talks a good game with him on occasion, but that’s probably all an act. Deep down, Sasha may see the potential for disaster here. If she blows this and Nina dumps Valentin, he’ll have nothing left to lose and could certainly go after her.

All these concerns will be swirling around in Sasha’s mind as Michael continues to pursue her. General Hospital fans know he can be persistent – not in a creepy way, but definitely in a “please let me love you” kind of way. Despite Sasha’s insistence that it wouldn’t work out, Michael felt a spark and did his best to win her over. He’ll keep it up during May sweeps and hope that Sasha agrees to stay in town.

When Nina realizes Sasha and Michael are growing closer, she’ll try to nudge things along even further. Nina also wants Sasha to remain in Port Charles, so she’ll be thrilled. Michael is a great guy that Sasha can count on, which will add to Nina’s joy over the situation. Valentin, on the other hand, will be completely enraged by this new development.

GH viewers can expect more clashing between Valentin and Sasha. He’ll wonder what in the world she thinks she’s doing. Valentin will remind Sasha of what’s at stake and undoubtedly threaten her. Will Sasha be forced to push Michael away out of fear? If she doesn’t, Valentin could resort to some sabotage. He’ll do whatever it takes to keep Sasha out of Michael’s life.

This won’t just be about Nina either. Michael is part of the Corinthos clan, so Valentin will worry about Sasha shattering his heart. He won’t want Sonny Corinthos (Maurice Benard) making it his personal mission to destroy him.

General Hospital spoilers say Valentin will quickly lose his grip on the fake daughter plot as we head into May sweeps. It’s clear that this storyline’s about to spiral out of control! Will Sasha’s budding romance be her downfall? Will Michael somehow find out she’s in cahoots with Valentin or even discover her secret?

Regardless, Sasha can only keep up this daughter ruse for so long! We’ll give you updates as other GH news comes in. Stick with the ABC soap and don’t forget to check CDL often for the latest General Hospital spoilers, updates and news.