General Hospital Spoilers: Valentin’s Bullying Has Gone On Long Enough – Will Sonny Save Spencer From This Misery? 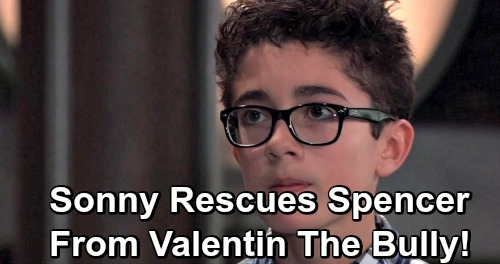 General Hospital (GH) spoilers reveal that Valentin Cassadine (James Patrick Stuart) needs to find some more formidable foes. He’s been spending far too much of his time sparring with Spencer Cassadine (Nicolas Bechtel) lately. What does Valentin get out of fighting with a child?

Spencer can be a pain to deal with and sometimes pulls off some pretty advanced tactics for his age. However, he’s still just a kid at the end of the day. Valentin is supposed to be a feared General Hospital villain, not a bullying babysitter.

GH fans remember Valentin shooting Nikolas Cassadine (Nick Stabile) almost three years ago, which resulted in Nik plummeting to his death. Spencer and Valentin have been at odds ever since Valentin took over Spoon Island. We can understand thinking Spencer’s a pest, but Valentin goes too far in repaying Spencer’s harassment.

When Spencer went to Nina Reeves (Michelle Stafford) for help, she suggested that he didn’t need any. Nina doesn’t buy Spencer’s story and thinks he can stand up to Valentin just fine by himself anyway. She’s dismissing Valentin’s bullying much like she dismissed Charlotte Cassadine’s (Scarlett Fernandez).

Nina refuses to see that Charlotte emulates her father. Is Nina so starved for love that she overlooks everything negative that Valentin or Charlotte does? Laura Webber (Genie Francis) may be Spencer’s grandmother, but Spencer won’t turn to her because of the election tampering. Valentin has threatened to tell Laura about this several times now and is holding it over Spencer’s head.

Spencer knows if Laura confronts Valentin, he’ll be in trouble because Valentin will reveal his big secret. The kid’s afraid of going to jail because Valentin has convinced him that’ll happen if the truth comes out. Spencer also doesn’t want his grandmother to lose her job as mayor, so he’s stuck and terrified.

Sonny Corinthos (Maurice Benard) is already aware of the election tampering since Spencer confided in him. He advised Spencer to come clean to Laura, but Spencer hasn’t taken that advice just yet. Sonny loves his nephew and isn’t about to let someone get away with bullying or threatening him.

Will Spencer turn to Uncle Sonny since he’s Charlotte’s step-grandfather as well? Valentin doesn’t want to make an enemy of Sonny, so he’s the best person to shut Valentin down and stop his attack on Spencer. General Hospital spoilers say Spencer will face more difficulties if he doesn’t find an ally like Sonny, so let’s hope it all works out.

Do you think Valentin needs to pick on someone his own age? We’ll give you updates as other GH news comes in. Stay tuned to the ABC soap and don’t forget to check CDL often for the latest General Hospital spoilers, updates and news.