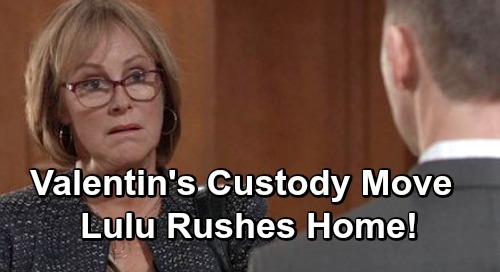 General Hospital (GH) spoilers tease that Valentin Cassadine (James Patrick Stuart) will hope to secure Nora Buchanan’s (Hillary B. Smith) services again. He’ll stop her from catching her train out of town and insist she can name her price. Nora will note that this seems urgent, but she’s too busy to take on the case. She’ll suggest if Valentin is facing criminal prosecution, she can give him a referral.

However, Valentin will contend that this isn’t a criminal matter; it’s a family one. Valentin will praise Nora for the fantastic job she did when he was fighting for custody of Charlotte Cassadine (Scarlett Fernandez). He’ll admit that he revised the agreement with Lulu Falconeri (Emme Rylan) for Charlotte’s sake, so Nora will think that’s great. She really won’t see what the problem is here.

That’s when Valentin will get to the point. He’ll gripe that Lulu left the country indefinitely without giving him so much as a day’s notice. Valentin will think that’s unacceptable when they’re trying to share custody of their daughter. Nora will disagree since Lulu’s been through so much. She’ll argue that after getting attacked by serial killer Ryan Chamberlain (Jon Lindstrom), Lulu was entitled to a vacation!

Of course, Lulu’s also dealing with issues Nora doesn’t know about. It was rough on her when Dante Falconeri (Dominic Zamprogna) had to leave again, especially since Lulu isn’t sure he’ll ever be back. Lulu really needed some time to clear her head away from Port Charles, so GH fans know she packed Rocco Falconeri (O’Neill Monahan) up and headed for Paris.

Nevertheless, General Hospital spoilers say Valentin will only be concerned about where things stand when it comes to custody. He’ll refuse to fly Charlotte back and forth every two weeks while Lulu’s trying to find herself. Valentin will declare that he’s the de facto custodial parent. He’ll want Nora to help him make the court aware of the circumstances and amend the custody order.

Nora will change her tune a bit and suggest she gets where Valentin’s coming from. She’ll understand why Valentin would want to clarify the matter. Does that mean Nora will agree to pitch in? General Hospital spoilers hint that Lulu will return to PC during the week of April 22-26, so could this news be what sparks her quick comeback?

Regardless, Valentin’s awfully playing dirty considering this woman was nearly stabbed to death! Lulu doesn’t deserve to suffer any more than she already has, so let’s hope she gets back to Port Charles in time to stop Valentin’s cruel move. We’ll give you updates as other GH details emerge. Stick with the ABC soap and don’t forget to check CDL often for the latest General Hospital spoilers, updates and news.