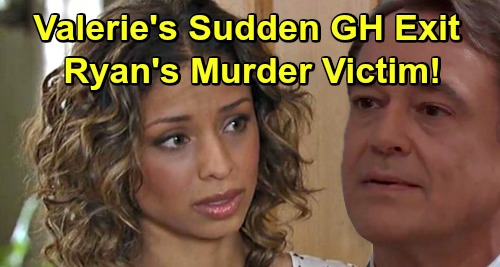 General Hospital (GH) spoilers tease that Brytni Sarpy (Valerie Spencer) has scored a contract role over on The Young and the Restless. She starts filming as Elena Dawson next week, so she obviously won’t be shooting any more GH scenes. Sarpy’s remaining scenes as Valerie will play out, but we probably shouldn’t expect any major developments before she departs on screen.

Of course, we have to wonder what will become of Valerie. There are a few ways GH could handle Sarpy’s exit. One possibility is bringing in a recast, but we’d say that’s not likely. If the show didn’t feel Valerie was important enough to be a contract role, they probably wouldn’t think she was important enough to recast either. It’s not like they’ve been using Valerie much at all anyway.

That’s a shame since General Hospital set up an interesting story, which had many fans intrigued. Valerie alluded to having a close female friend once upon a time, but their friendship fell apart when “things got weird.” She kissed Kristina Corinthos-Davis (Lexi Ainsworth) soon after, so we can probably guess what was behind that weirdness!

It seemed like GH was going to have Valerie struggle with her sexuality a bit and potentially kick off a romance with Kristina, who could use a new love interest. Now they’ll have no choice but to shift gears. Valerie will need some sort of exit story, even if it’s just an explanation that other characters mention in passing. It all depends on how much notice Sarpy gave General Hospital about her new job.

Valerie could move to another town or be sent on some special police project. Of course, a serial killer is still on the loose as well! No one is safe until Ryan Chamberlain (Jon Lindstrom) is behind bars or dead. Could Valerie be at risk? Will Valerie face a grim fate as another of Ryan’s murder victims? Again, it all depends on how this soap swap played out. The writers may not have had enough time to include Valerie’s exit in that story.

Nevertheless, it’s at least a possibility to consider. Ryan might as well take out another victim or two before he ultimately gets caught. No matter what happens, let’s just hope Valerie and Kristina get some closure regarding that lip lock. They both need it, so maybe they can have a nice conversation and get their friendship back on track before Valerie exits.