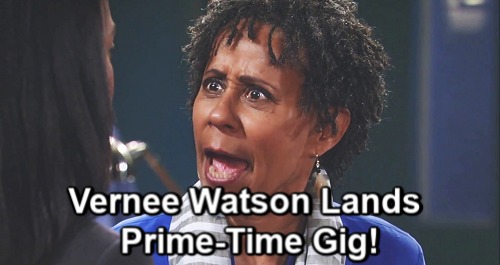 Stella is currently involved in a storyline with a relative found through sending DNA to a genealogy site. She was inspired to do so by TJ Ashford (Tajh Bellow) when the Ashfords were looking for donor matches to supply a kidney for Jordan Ashford (Briana Nicole Henry).

Jordan’s kidneys were injured when she was struck by a car driven by Drew Cain (Billy Miller). Drew had a sudden headache and was struck with blindness in a parking garage, pinning Jordan to the wall.

The kidney was ultimately donated by Ryan Chamberlain (Jon Lindstrom) through some very well-conceived trickery and cooperation of several of Jordan’s friends and family! In a recent General Hospital episode, Stella’s relative decided to meet with her. But the relative is in a military family who previously was in Port Charles but is now in London, England and so Stella has flown out to meet the relative.

The comedy, Bob Hearts Abishola is also set in a hospital, but in Detroit, Michigan where Watson will play a character named “Gloria”. It features Bob, played by Billy Goodell, who is a middle-aged compression socks salesman who has a heart attack and is hospitalized. Bob falls in love with Abishola, his cardiac nurse, who doesn’t return his feelings. Nonetheless, he continues to pursue her and to win her heart.

Folake Olowofoyeku, who was also in Transparent plays Abishola. Other actors on the new series include Christine Ebersole of Royal Pains and Madame Secretary who plays Dottie. Matt Jones of Mom plays Douglas, Maribeth Monroe of The Good Family plays Christine, Shola Adewusi of Emmerdale plays Auntie Olu, Barry Shabaka Henley of Bosch will play Uncle Tunde and Travis Wolfe Jr. of Raven’s Home will be featured as Dele.

This Is Not Watson’s First Foray Into Prime-Time Television

The comedy is produced by Chuck Lorre, who is known for producing such classic comedy hits as Grace Under Fire, Dharma and Greg, Two and a Half Men, The Big Bang Theory, Mike and Molly, Mom, and Roseanne.

This is not Watson’s first prime-time role by any means. She has acted on many classic TV programs since she was a teenager. Prior to landing the role of Stella Henry on General Hospital, she played Vernajean Williams on Welcome Back Kotter from 1975-1979, Viola “Vy Smith” on The Fresh Prince of Bel-Air from 1990-1996, and various other prime-time roles from the 1970s through to the present day. She also appeared on the CBS soap The Young and the Restless as Birdie for 19 episodes in 1999.

We congratulate Vernee Watson on her new role as Gloria, but also look forward to her reprising the feisty Auntie Stella on General Hospital! Stay tuned to General Hospital and keep checking General Hospital spoilers frequently for all the latest news, updates and developments!