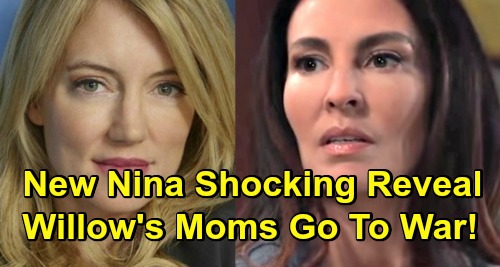 General Hospital (GH) spoilers tease that Nina Reeves (Michelle Stafford) has some fierce battles in her future. She’s sure to unleash her wrath on Valentin Cassadine (James Patrick Stuart) when she finds out about his deception. Valentin seems to add another lie to the pile every day, so he’s really burying himself deep here.

Of course, Nina will also be furious and deeply disappointed in Sasha Gilmore (Sofia Mattsson). She truly believes Sasha is her daughter and has established a special bond with her. Sasha has also opened her heart to Nina, so it’s been rough on her to dupe her like this.

At the same time, coming clean would be even more painful. That’s why Sasha will keep her mouth shut for now, but what about down the road? Will the guilt become too much to bear? Will Liesl Obrecht (Kathleen Gati) spill the beans instead? Could Nina simply put a few clues together herself?

Whatever the case, General Hospital spoilers reveal that the truth about Sasha will likely come out next month. Cynthia Watros will take over for Stafford when she starts filming in early June, so that’s important to keep in mind. However, let’s think about the ramifications of Valentin’s lies and the drama they’ll lead to. Nina will inevitably be a mess once the one thing she wanted most is taken away.

Naturally, the light at the end of this tunnel will probably be Willow Tait (Katelyn MacMullen). GH has set Nina and Willow up as bitter enemies, but we’re betting that’ll all evaporate on Nina’s end. She’s the kind of gal who will likely show Willow instant love or close to it. Nina will jump at the chance to get to know her daughter – the REAL one – with no deception or “gotcha” moments coming.

Willow should soften in time as well, but there are still more showdowns left for Nina. She may end up tangling with Shiloh Archer (Coby Ryan McLaughlin), but it’s her feud with Harmony Miller (Inga Rademacher) that may be the most interesting. General Hospital spoilers say they could deliver some exciting Mom vs. Mom drama!

We know Willow used to go by the name Kali Miller. Based on comments Harmony’s made and her overall behavior, she seems to have served as Willow’s mother. Nina is likely Willow’s bio mom, so she’s sure to have something to say once the whole truth comes out. She certainly won’t be happy about having her baby girl stolen. The fact that Harmony brought Willow in a cult makes all this even worse!

On Tuesday’s episode, April 16, Willow talked about how her mother pushed her toward Shiloh. Her mom convinced her it was an honor to endure the horrible things Shiloh put her through. It’s clear that Willow’s mom played a huge role in destroying her life – at least before she left the cult on her own.