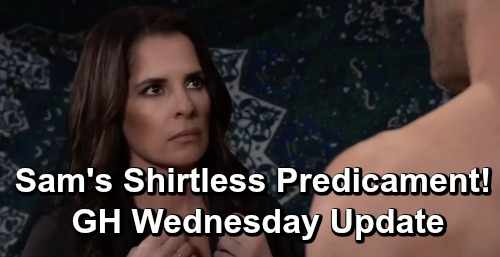 General Hospital (GH) spoilers for Wednesday, April 24, tease that Alexis Davis (Nancy Lee Grahn) will be in panic mode at the safe house. After Kristina Corinthos-Davis (Lexi Ainsworth) gets caught with her mom’s phone, Alexis will insist on knowing who she called. She’ll demand the truth right this instant, but Kristina may or may not offer that up.

Valerie Spencer (Paulina Bugembe) will be the one who hears Kristina’s cry for help, so she’ll continue her mission for answers. Harrison Chase (Josh Swickard) will also push Michael Corinthos (Chad Duell) for the real story, but that’ll be another dead end. Still, Chase will assume Michael’s holding back. He’ll insist that by kidnapping Kristina, her family has given Shiloh Archer (Coby Ryan McLaughlin) a weapon.

Next, Willow Tait (Katelyn MacMullen) will tell off Harmony Miller (Inga Cadranel). Harmony will likely turn out to be Willow’s adoptive mother rather than her bio mom, but Willow doesn’t seem to be in the loop. Regardless, Willow will reiterate that she doesn’t want back in Dawn of Day. She’ll refuse to have anything to do with Harmony either, but Harmony will keep up her efforts.

At the DoD house, Sam McCall (Kelly Monaco) will avoid crossing the line with Shiloh. He’s encouraging her to take off her shirt in the attic, but it shouldn’t go much further than that. Maybe Shiloh just wants to find out if Sam would actually take this leap. As long as she can make it look that way, her plan will remain intact.

Shiloh prefers to have ceremonial sex as part of “The Trust” initiation, so doing it now wouldn’t be his style. Instead, it appears Shiloh will take Sam downstairs, put his shirt back on and insist she’s ready for the next step. Shiloh will tout the benefits of joining his inner circle and becoming one of his closest confidants. He’ll lay it on thick as he works to make Sam feel special.

Other General Hospital spoilers say Sonny Corinthos (Maurice Benard) will want drastic action. He’ll order Jason Morgan (Steve Burton) to eliminate someone, and it looks like it’ll be Shiloh. This would mean taking a huge risk since Sonny knows Shiloh has leverage. However, Sonny may feel like he has no other choice. He’s willing to do whatever it takes to protect Kristina – including resort to murder.

Of course, Shiloh doesn’t seem to be going anywhere just yet. GH spoilers suggest he’ll wiggle out of life-threatening danger for now. Over with Ava Jerome (Maura West), she’ll state that Ryan Chamberlain (Jon Lindstrom) is dead as she chats with Julian Jerome (William deVry) and Curtis Ashford (Donnell Turner). She may pretend to change her tune so she can target Ryan in peace.

While Julian battles suspicions about his sister, Ava will get a call from Dr. Kevin Collins (Jon Lindstrom). Thanks to some coaxing from Laura Webber (Genie Francis), Kevin will decide to pitch in on Ava’s scheme. Laura will join forces with them as they work to draw Ryan out of hiding and prevent more terror.