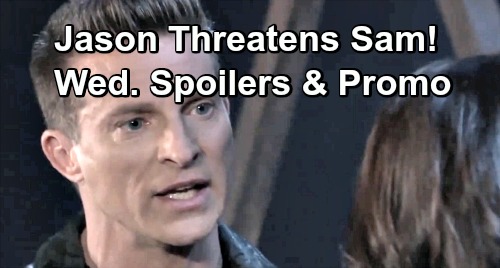 General Hospital (GH) spoilers for Wednesday, April 3, tease that Oscar Nero (Garren Stitt) will have a poignant conversation with Josslyn Jacks (Eden McCoy). She’ll feel like he’s already given her so much, but Oscar will want to give Joss something more. Whether this is a tangible gift or just something he’ll share from his heart, Josslyn will have tears in her eyes as she listens. She’ll hang on every word Oscar says and savor this moment, which is good since another medical crisis is about to hit.

At Charlie’s Pub, Kristina Corinthos-Davis (Lexi Ainsworth) will need a favor. It looks like she’ll ask Julian Jerome (William deVry) for an advance, so he’ll wonder how much she needs. Of course, Kristina is just sinking more cash into DoD and all Shiloh Archer’s (Coby Ryan McLaughlin) creepy classes. She may have to be vague about what she’s using the money for it she wants Julian to hand it over.

Over with Jason Morgan (Steve Burton) and Sam McCall (Kelly Monaco), they’ll sneak off for a private discussion. General Hospital spoilers say Jason will put his foot down when it comes to Danny Morgan (T.K. Weaver). He won’t want Shiloh going anywhere near their son again. Sam clearly doesn’t want Shiloh around Danny either, so she may vow to be more careful next time.

Elsewhere, it appears someone will approach Margaux Dawson (Elizabeth Hendrickson) with Dawn of Day suspicions. Perhaps it’ll be Jordan Ashford (Briana Nicole Henry) or even Harrison Chase (Josh Swickard). Regardless, Margaux will wonder if this person thinks there’s something to investigate. She probably won’t agree since Shiloh’s already reeling her in, too.

Other General Hospital spoilers say Sonny Corinthos (Maurice Benard) will join Michael Corinthos (Chad Duell) at the boxing gym. As they chat, Sonny will ask if Michael has some sort of exit plan. If Michael has a way to help Kristina, Sonny will want to make sure he’s got all his bases covered. Shiloh is one slippery GH character, so sneak attacks could be a concern.

At the community house, Shiloh will confirm that Kristina is all in on her devotion to DoD. He’ll contend that once Kristina joins “The Trust,” there’s no going back. General Hospital spoilers say Kristina will indeed pass the point of no return on Wednesday, so big trouble’s brewing. It sounds like Kristina will give Shiloh her trust offering, which involves Alexis Davis’ (Nancy Lee Grahn) dark secret.

General Hospital has an excellent episode coming up, so don’t miss it. We’ll give you updates as other GH news emerges. Stay tuned to the ABC soap and don’t forget to check CDL often for the latest General Hospital spoilers, updates and news.