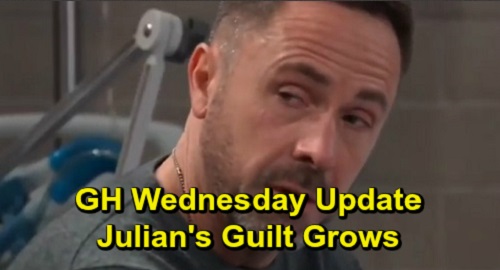 General Hospital (GH) spoilers for Wednesday, December 11, tease that Sonny Corinthos (Maurice Benard) will lash out at Carly Corinthos (Laura Wright). Of course, Sonny won’t really be angry with Carly. He’ll mostly be mad at the situation he’s facing with his dad, Mike Corbin. Sonny will yell about how he’s not going to sit around and watch his father die.

Sadly, there won’t be much else to do if the study Griffin Munro’s (Matt Cohen) suggseted doesn’t pan out and there are no other options. Sonny will have to accept that he’s losing Mike at some point, but he’ll hope to prolong the pain as long as possible.

Next, Michael Corinthos (Chad Duell) will fret about Lucas Jones (Ryan Carnes) and the possibility that “Wiley Cooper-Jones” (Erik and Theo Olson) could lose him. Josslyn Jacks (Eden McCoy) will step up to make sure Michael knows Lucas is a fighter. She’ll think they have to keep hope alive!

Julian Jerome (William deVry) will ty to do the same, but it’ll be tough when he’s dealing with so much guilt. On Wednesday’s GH episode, Julian will insist that it’s all his fault. There’s no word yet on who Julian will be talking to, but it might be Ava Jerome (Maura West). She’d gladly listen if Julian wants to get his remorse off his chest.

However, there’s also a chance Julian will simply allude to his guilt. He may speak with someone else and offer a vague explanation for the way the feels. Speaking of vague explanations, Ned Quartermaine (Wally Kurth) will get one of those from Brook Lynn Ashton (Amanda Setton). She’ll remain cagey about who was harassing her and what kind of trouble she’s landed in.

Ned will rev up the pressure and count on Brook Lynn spilling more information. He won’t understand how things could go wrong so quickly, so Brook Lynn will have to offer enough to appease her father.

Over with Lulu Spencer (Emme Rylan), she’ll do some commiserating with Olivia Quartermaine (Lisa LoCicero). Olivia will just wish there was a way to help Dante Falconeri (Dominic Zamprogna), and Lulu will feel exactly the same. Just because Lulu’s moved on doesn’t mean she doesn’t think about what might’ve been.

Other General Hospital spoilers say Nelle Benson (Chloe Lanier) will call up Martin Gray (Michael E. Knight) and demand another meeting. Once Martin arrives, Nelle will argue that he has to get her out of there now. She’ll be looking for immediate freedom, so Martin may hope he can pull some strings and score one of the early releases Pentonville happens to be handing out.

Harmony Miller (Inga Cadranel) will get one of those and make her way over to see Willow Tait (Katelyn MacMullen). Their conversation will take an interesting turn when Willow insists “Wiley” isn’t Harmony’s grandson. She’ll probably warn Harmony that “Wiley” is adopted and has his own family. Willow won’t want Harmony stirring up any kind of drama, so Harmony will likely promise she won’t.