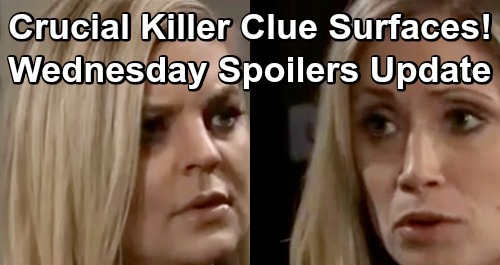 General Hospital (GH) spoilers for Wednesday, February 27, tease that Ryan Chamberlain (Jon Lindstrom) will blow his top. His anger’s been building ever since Franco Baldwin (Roger Howarth) took credit for the murders. That live interview infuriated Ryan, especially when Franco acted like Ryan couldn’t even begin to compete with his talent.

GH fans can expect Ryan to go ballistic on Wednesday. He’ll demand that Franco tell the truth, so it seems Franco will – to “Dr. Kevin Collins” anyway. Franco will fret about how this situation is going to be the death of him. He’ll admit the scheme has been tougher than he thought – mostly because he has to deceive Elizabeth Webber (Rebecca Herbst).

Once Ryan understands what’s up, he may think he can use this to his advantage. Ryan should learn Franco and Jordan Ashford (Briana Nicole Henry) were setting a trap, so he wouldn’t want to fall into it. He believes he’s far smarter than people like Jordan and Franco. Ryan might plan to make the ruthless move they anticipate and still get off scot-free.

Next, Lulu Falconeri (Emme Rylan) will keep pondering that bizarre interview. Franco’s answers made sense for someone who’s a deranged, art-obsessed killer. Nevertheless, this won’t feel right to Lulu. She’ll think there has to be something she’s missing, so she’ll dig until she finds it. General Hospital spoilers say Lulu will uncover a bombshell and call on Maxie Jones (Kirsten Storms) for help.

Lulu will find out a crucial detail she’s overlooked regarding these murders. Will she mean the new batch or the old crime spree? Lulu might recall she only found info for seven of Ryan’s victims online. “Kevin’s” list had nine victims on it, and the discovery of that discrepancy nearly got Lulu killed.

Then again, Lulu may stumble across some startling clue about the recent killings. She’ll rely on Maxie’s assistance no matter what, so it should be fun to see these two team up. Over with Liz, her faith in Franco will be fading fast. Liz wants to believe there’s some other explanation, but she won’t be sure she can keep holding out for a twist.

Drew Cain (Billy Miller) will console Liz when she needs him most. He’s got a hunch that Franco’s working some angle, which Curtis Ashford (Donnell Turner) backed up. Drew will urge Liz to trust Franco a little bit longer. He’ll realize it’s hard, but he just won’t think Franco’s the monster he claims to be.

Other General Hospital spoilers say Josslyn Jacks (Eden McCoy) and Oscar Nero (Garren Stitt) will support Cameron Webber (William Lipton). Cam will be taken aback by Franco’s interview in one way and not surprised in another. He’ll be livid with Franco for duping his family and causing so much pain.

On the bright side, Cameron will be glad the world knows Franco is a killer now. He’ll take comfort in the fact that Franco’s locked up, but he’s in for another shock once the truth’s revealed! In the meantime, Ava Jerome (Maura West) will shut down Scott Baldwin’s (Kin Shriner) concerns. Scott will think “Kevin” is eventually going to ditch Ava like he ditched Laura Webber (Genie Francis).

Ava won’t buy that since she feels such a strong connection with “Kevin.” No one else has ever been so accepting and kind to her, so she won’t care what Scott has to say. Alas, General Hospital spoilers reveal that Ava is in for a rude awakening. Sooner or later, “Kevin” will be exposed as Ryan – and the person who took Kiki Jerome’s (Hayley Erin) life.

That shocker’s going to strike in the near future, so don’t miss Ava’s looming wrath. We’ll give you updates as other GH news comes in. Stay tuned to the ABC soap and don’t forget to check CDL often for the latest General Hospital spoilers, updates and news.