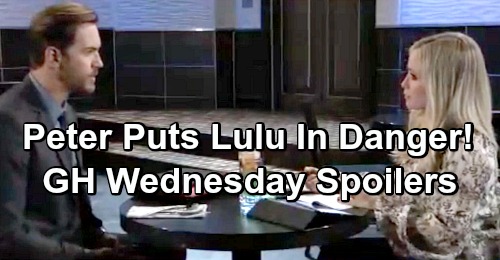 General Hospital (GH) spoilers for the Wednesday, January 16, tease that there’ll be some concerns about Lucy Coe’s (Lynn Herring) book event. With Mac Scorpio (John J. York) by her side, Jordan Ashford (Briana Nicole Henry) try to shut the whole thing down. Jordan will insist that Maxie West (Kirsten Storms) needs to cancel this before it becomes a crime scene. She’ll definitely feel like danger is looming.

However, Maxie may not be able to do much unless Jordan can legally put a stop to it. There’s a good chance stubborn Lucy will want to move forward with the plan. Mac will at least want to make sure Maxie is protected. He’ll go to Peter August (Wes Ramsey) and push him to keep an eye on Maxie at this event. Mac won’t want Maxie landing in harm’s way, so Peter will be sure to watch her closely.

In the meantime, Peter will have what could be very dangerous advice for Lulu Falconeri (Emme Rylan). He’ll suggest that if Lulu can’t get someone at the PCPD talk to her, she should just find someone else. There could be big trouble if Lulu seeks out “Dr. Kevin Collins,” who is actually Ryan Chamberlain (Jon Lindstrom) right now. 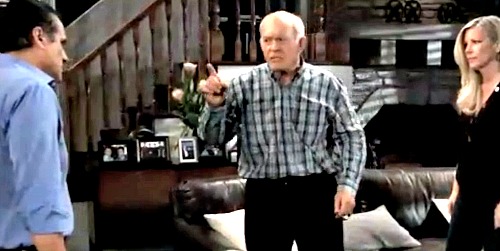 Lulu might want to have another chat with the doc about his evil brother. She could easily provoke Ryan and put herself on his hit list in the process. Over with Ava Jerome (Maura West), she’ll tell Scott Baldwin (Kin Shriner) that he won’t be seeing her around much anymore. Will Ava decide to bail on Avery Corinthos (Ava and Grace Scarola) after all?

Sonny Corinthos (Maurice Benard) refused to go for the changed custody agreement Ava proposed. She may determine that Sonny and Carly Corinthos (Laura Wright) at least provide a loving, stable home. Ava’s eager to get away from the Kiki Jerome (Hayley Erin) memories that haunt her in Port Charles. She’s also intrigued by Ryan’s devotion to her and his insistence that they can have a life together elsewhere.

Ava may be tempted to go for it despite the less than ideal Avery situation. She could still come home for visits here and there. Fortunately, this plan will obviously fall through somehow. Perhaps Scott can make Ava see that she has to stay in PC and be there for her remaining daughter.

Other General Hospital spoilers say Ryan will deliver a request to Laura Collins (Genie Francis). She’ll seem quite agitated as she declines it. Laura will blame her new role as the mayor of Port Charles, but there’ll probably be more to it than that. “Kevin” has his moments, but he always manages to get back on Laura’s bad side.

Later, Laura will announce something surprising, so it could be about her first mayoral duties. Over with Stella Henry (Vernee Watson), she’ll confide in Curtis Ashford (Donnell Turner) as she deals with some Marcus Godfrey (Nigel Gibbs) drama. The Corinthos clan will also face plenty of that on Wednesday. Mike Corbin’s (Max Gail) condition will decline, so GH fans can expect a major meltdown.

Sonny and Carly will have to accept that Mike’s fading faster than ever. He won’t recognize them as he lashes out and that’ll happen more frequently in the coming episodes. We’ll give you updates as other General Hospital news emerges. Stick with ABC’s GH and don’t forget to check CDL often for the latest General Hospital spoilers, updates and news.