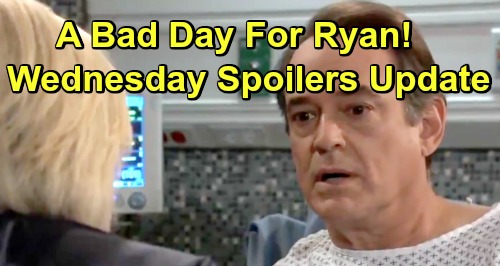 General Hospital (GH) spoilers for Wednesday, January 23, tease that Laura Webber (Genie Francis) will be frustrated by the slow investigation. She’ll feel like Jordan Ashford (Briana Nicole Henry) needs to kick things up a notch here. Lulu Falconeri (Emme Rylan) was attacked, so Laura has no intention of letting the person responsible get away with this.

Maxie will need a quiet place to reflect, so she’ll head to the cemetery. General Hospital spoilers say Maxie will want to have a conversation with Nathan West (Ryan Paevey). He obviously can’t talk back, but just speaking near his gravestone somehow helps. Maxie feels close to Nathan there, so she’ll fill him in on her Lulu fears. She may bring up her attraction to Peter August (Wes Ramsey), too.

Maxie might admit that she’s torn between her past and her future. She can’t be with Nathan, but the idea of letting him go feels impossible sometimes. GH viewers can expect Maxie to seek answers and hope she can find a way forward.

Back with Jordan, she’ll have a few questions for Peter. General Hospital spoilers say Jordan will summon Peter to the PCPD. He’ll gladly help with her mission to find Kiki Jerome’s (Hayley Erin) killer and Lulu’s attacker. Peter won’t want this menace to get away with causing so much heartache.

Speaking of heartache, Charlotte Cassadine (Scarlett Fernandez) will certainly face some on Wednesday. Valentin Cassadine (James Patrick Stuart) and Nina Reeves (Michelle Stafford) will gently break the news about Lulu’s attack. Poor Charlotte will be crushed to find out her mom’s struggling at GH.

Nina and Valentin will try to give Charlotte hope, but she’ll remain incredibly worried. Laura will also be busy fretting, but she’ll put her own concerns on hold to console her granddaughter. Charlotte will spend some time with Laura as they await word on Lulu’s status. At least they’ll have each other to lean on.

Fortunately, General Hospital spoilers say Lulu may soon be on the mend. She could always have a setback later, but it appears things won’t be as dire as they once were. In Ryan Chamberlain’s (Jon Lindstrom) room, he’ll continue to play the part of caring “Dr. Kevin Collins” and act interested in Lulu’s well-being. In reality, Ryan will just be fishing for info in hopes that Lulu died.

Based on Ava Jerome’s (Maura West) comments, Ryan will assume that Lulu already faded away. That should leave him relieved, but Ava will set the record straight. She may indicate that “Kevin” misunderstood what she was trying to tell him. Ava will most likely insist that the changes are positive instead, so he’ll realize his nightmare’s not over yet.

Nearby, Anna Devane (Finola Hughes) and Dr. Hamilton Finn (Michael Easton) will reflect on the virus crisis. Since “Kevin” suddenly lost his sight as well, Anna and the doc will ponder the connection. Finn will ask Anna about her relationship with Kevin and how much they’ve interacted lately. He’ll want to find some sort of current link, but the answer may lie a bit deeper in the past.

Other General Hospital spoilers state that Sam McCall (Kelly Monaco) will take care of business! She’ll call for help before rushing to Jason Morgan’s (Steve Burton) rescue. Sam will save the life of the man she loves, so it’ll be a good day for “JaSam” fans.

Thankfully, this GH adventure above the catacombs will have a happy ending. We’ll keep you posted as other details emerge. Stay tuned to the ABC soap and don’t forget to check CDL often for the latest General Hospital spoilers, updates and news.