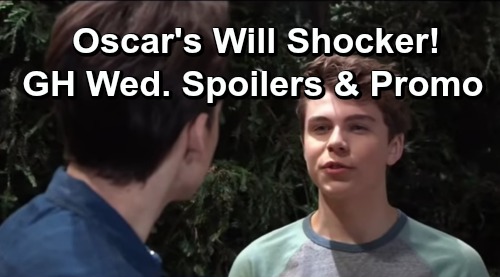 Meanwhile, Jason Morgan (Steve Burton) will have some questions. He’ll walk in on Sonny Corinthos’ (Maurice Benard) conversation with Brick (Stephen A. Smith), so he’ll wonder who’s getting a new identity. Jason may have some concerns about both Sonny and Dev getting in trouble, but he should understand Sonny’s motives here. He owes Dev big time for his help in Turkey.

Over with Carly Corinthos (Laura Wright), she’ll advise someone with a tough problem. Speaking of problems, Kim Nero (Tamara Braun) sure has a lot of them! She nearly raped drugged Drew Cain (Billy Miller), so she’ll owe him an apology on Wednesday. Drew didn’t turn Kim over to the cops, but he’ll still want to make it clear she crossed a line.

Kim will assure Drew that she understands and is now seeking professional help. She won’t be able to explain how sorry she is for what they almost did, but at least they didn’t take that step. Drew should be relieved to know Kim won’t be bringing a baby into the world like this.

It’s worth mentioning that Oscar’s will reading will take a crazy turn on Thursday, so Wednesday could set up that GH shocker. Will Shiloh’s arrest be to blame for the chaos? It’s a possibility since Shiloh will be an unwanted guest at a big event.

Until then, Shiloh will sit down with Sasha and introduce himself. He’ll be yanked out of his chair once Michael Corinthos (Chad Duell) comes to Sasha’s rescue. Even saying two words to Sasha is two words too many! Michael will be Sasha’s fierce protector and enlighten her on Shiloh’s shady history. She should appreciate the way Michael looks out for her.

Sasha will reach a crucial decision on Wednesday, so perhaps she’ll want to get a little more serious with Michael. She may explain her growing feelings and hope Michael’s still on the same page. He undoubtedly will be, but their relationship may be doomed once the truth about Sasha’s scheme with Valentin Cassadine (James Patrick Stuart) comes out.

Finally, Alexis Davis (Nancy Lee Grahn) will do Olivia Quartermaine (Lisa LoCicero) a favor. General Hospital spoilers say they’ll work on a project, so it should be nice to see them in some scenes together. We’ll give you updates as other GH details emerge. Stay tuned to the ABC soap and don’t forget to check CDL often for the latest General Hospital spoilers, updates and news.