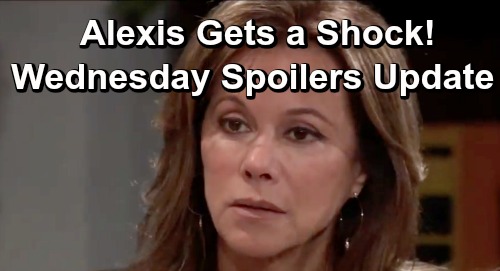 General Hospital (GH) spoilers update for Wednesday, July 3, tease that Sonny Corinthos (Maurice Benard) will have an intriguing meeting. He’ll meet with a woman to conduct a little business – and he won’t exactly be nice about it. Sonny won’t be able to afford any wrong moves, so he’ll warn this lady about double-crossing him. He’ll make it clear she won’t like the outcome if she does!

Over with Josslyn Jacks (Eden McCoy), she’ll fret over her own problems. Perhaps Dev (Ashton Arbab) will inadvertently cause some drama. It’s undoubtedly been hard getting used to having Dev in the house, so Joss may have some complaints. She’ll confide in Carly Corinthos (Laura Wright) and wonder what they should do, so at least Carly will get her mind off her baby’s spina bifida for a while.

Josslyn will get a surprising invite in Wednesday’s episode, but who will be the one who delivers it? Could Dev have something fun in store? Could Cameron Webber (William Lipton) want to hang out instead? Regardless, Franco Baldwin (Roger Howarth) will battle concerns about Cam’s well-being. He’ll suspect that Cameron’s got some deep issues that need to be addressed.

At GH, Bobbie Spencer (Jacklyn Zeman) will try to wrap her head around Scott Baldwin’s (Kin Shriner) out-of-the-blue proposal. She just won’t understand any of this, but Scott will insist they could work. He’ll feel relaxed with Bobbie in a way he doesn’t feel with other women. Scott will think that’s something to build on, especially since Bobbie’s facing a challenge now.

Bobbie was recently diagnosed with type 2 diabetes, so Scott will want to be by her side through it all. He’ll insist he could make a great husband and wonder if Bobbie’s ready to go get hitched. Bobbie will point out that comfortable isn’t her main relationship goal. She’ll show some serious resistance on the marriage idea, but will she be open to dating? Maybe Bobbie will surprise Scott and offer an alternative.

Other General Hospital spoilers say Laura Webber (Genie Francis) will enjoy a meal with Elizabeth Baldwin (Rebecca Herbst). They’ll take a moment to catch up and reflect on a recent good deed. Liz will assume she has Laura to thank for one Port Charles resident’s change of heart.

Did the mayor nudge the elementary school principal toward giving Willow Tait (Katelyn MacMullen) her job back? Does this involve a personal matter like the “Friz” wedding reception instead? Whatever the case, Liz will be grateful that Laura came through on something significant.

In lockup, Willow will be surprised when Kristina Corinthos-Davis (Lexi Ainsworth) arrives. Kristina will suggest she thought it was time for visit Willow and offer support. She’ll feel guilty for ever buying Shiloh Archer’s (Coby Ryan Laughlin) lies, but she’ll be glad Willow showed her the light. Kristina will be forever thankful for that, so she’ll let Willow know she’s behind her 100 percent.

Across town, Neil Byrne (Joe Flanigan) will flip out on Alexis Davis (Nancy Lee Grahn). He’ll state that he can’t treat Alexis anymore and urge her to leave. Alexis will seem taken aback by the sudden declaration, but what’s the reason? Since Neil will be so intent on Alexis heading for the exit, that suggests he’ll be uncomfortable. Alexis might mention what she stumbled across in her research online.

Neil wouldn’t like the idea of Alexis snooping into her therapist’s background. He likes to maintain the appropriate boundaries, so that would be crossing a line. Fortunately, Kristina may be instrumental in smoothing things over. If Alexis can’t get the job done herself, Kristina may make peace between them when she turns to Neil for help later this week.